Samsung Galaxy M31 #MegaMonster launched: Here’s everything you need to know, from 64MP camera to the 6000mAh battery 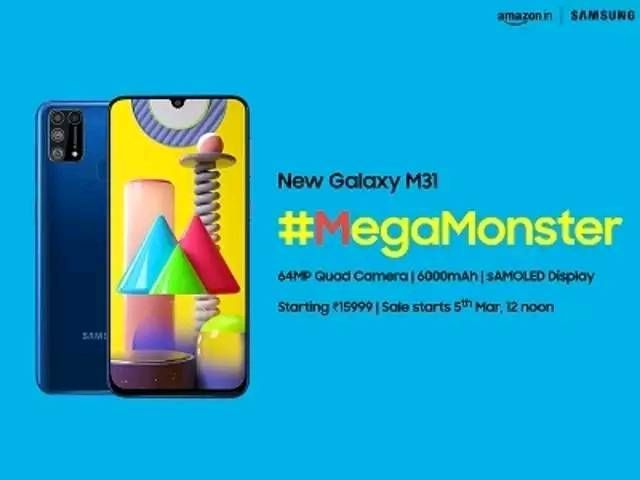 It’s officially here! The curtains from the Samsung Galaxy M31 have finally unveiled and we now know why Samsung calls it the #MegaMonster! The smartphone in all its glory looks more appealing than anything we have seen till date. Keeping the social media abuzz with the #MegaMonster Trail, Arjun Kapoor and Parineeti Chopra were absolutely right about the Galaxy M31. It is indeed a champion we all have been waiting for & we are sure once you buy the device, you cannot keep it off your hands! Let’s take a deep dive into the device and see why it will rule the category for the foreseeable future.
#MegaSnaps: 64MP Quad Camera 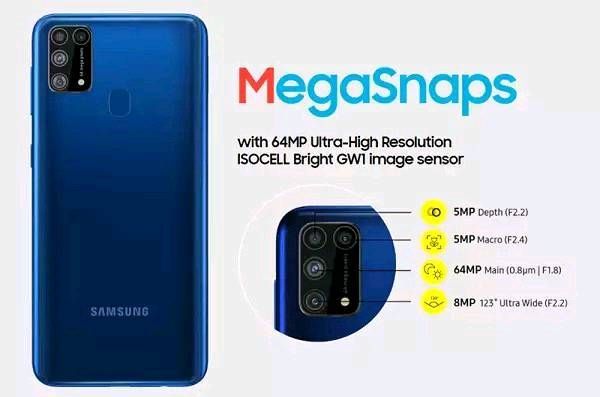 Firstly, let’s get to the hero feature of Galaxy M31 - the 64MP quad-camera set-up. On the rear of the device, you can see the Galaxy M31 following the footsteps of Samsung smartphone in 2020 and it looks absolutely flawless. Among the quad-cameras, you see the BIG 64MP main sensor with f/1.8 aperture, 1/1.72” 0.8µm sitting in between an 8MP Ultrawide sensor, a 5MP depth sensor and a super impressive 5MP Macro sensor. The MEGA 64MP main rear camera sensor will get you clarity and detail like never before. The 8MP Ultra-wide lens can shoot everything between its 123-deg field-of-view. The 5MP depth sensor really adds depth to the photos you click. It is ideal for portrait shots and comes with live focus feature as well. The brilliance of macro photography enhances thanks to the 5MP Macro sensor which lets you get close by up to 4cms.
#MegaVacay: Powered by a 6000mAh battery
What good a smartphone is if you cannot use it with all your heart? Well, the Samsung Galaxy M31 has got your back when it comes to beastly battery life. The #MegaMonster comes with a gigantic 6,000mAh battery. Samsung claims that it is the highest ever battery size in a mainstream smartphone. And make things even more interesting, there is a 15W USB Type-C charger in the box which has Fast Charging capability. Samsung claims that with the massive battery size, you can use the internet up to 21 hours, make Voice Call over LTE up to 48 hours. The sheer size of the battery will let you play videos for up to 26 hours and play music for up to 119 hours.
#MegaBinge: Class-leading sAMOLED display 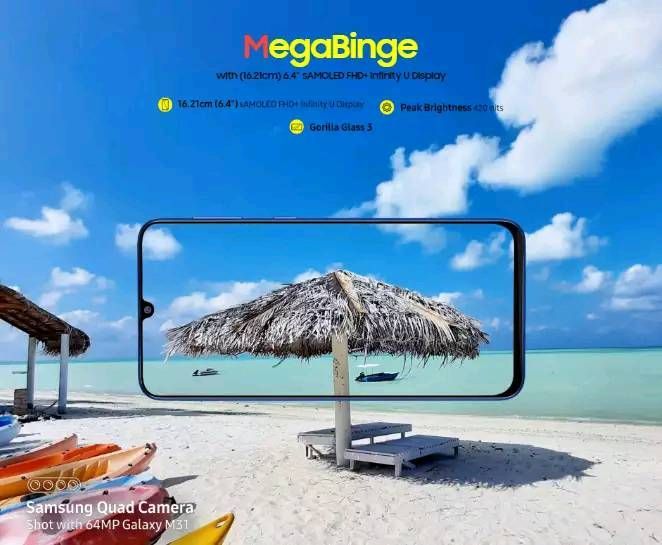 The first order of business is the screen! After all, the screen of the smartphone is what you will use the most. With this respect, the Galaxy M31 is the champion as it packs a huge 16.21cms (6.4”) FHD+ sAMOLED Infinity-U display. Also, thanks to the thin bezels, the screen looks absolutely massive. With the Full-Screen Mode, you will get an immersive viewing experience that counts the most when you are binging your favourite show on Netflix or Amazon Prime or MX Player. The Contrast Ratio on this #MegaMonster is a massive 100000:1 which means you will be a saturated display, elevating your experience of using the smartphone.
0 Likes
Share
Comment