Memory that "forgets" when the power goes off is called Random Access Memory (RAM). There is another kind of memory called Read-Only Memory (ROM) that doesn't suffer from this problem.

ROM chips are pre-stored with information when they are manufactured, so they don't "forget" what they know when the power is switched on and off.

Flash Memory has certain things in common with both RAM and ROM.

Like ROM, it remembers information when the power is off;

Like RAM, it can be erased and rewritten over and over again.

Flash memory, also known as flash storage, is a type of  nonvolatile memory that erases data in units called blocks  and rewrites data at the byte level.

Flash memory retains data for an extended period of time, regardless of whether a flash-equipped device is powered on or off.

There are 2 main types of flash memory used within devices, being NAND and NOR. The type of memory within a device is depending upon the type of data that is required to be stored as well as the use of that data.

Samsung Flagships use UFS and some others series use eMMC(usually NAND).

[Universal Flash Storage or UFS is a common flash storage specification for digital cameras, mobile phones, and other consumer electronic devices. The main idea behind UFS is to bring higher data transfer speed and increased reliability to flash memory storage.

eMMC is short for "embedded Multi-Media Controller" and refers to a package consisting of both flash memory and a flash memory controller integrated on the same silicon die.Today's embedded applications such as digital cameras, smart phones, and tablets almost always store their content on flash memory]

1. How is flash memory on a phone so compact?

Due to Transistors which are smaller in size.

Flash memory is a type of EEPROM chip, which stands for Electronically Erasable Programmable Read Only Memory. It has a grid of columns and rows with a cell that has two transistors at each intersection

(I answered this question once in google Q&A)

Shoji Ariizumi, reportedly coined the term "flash" because the process of erasing all the data from a  semiconductor chip reminded him of the flash of a camera.

Flash memory is also used for in-memory computing to help speed performance and scalability of systems that manage and analyse large sets of data.

The two transistors are separated from each other by a thin oxide layer. One of the transistors is known as a floating gate, and the other one is the control gate. The floating gate's only link to the row, or wordline, is through the control gate. As long as this link is in place, the cell has a value of 1. To change the value to a 0 requires a curious process called Fowler-Nordheim tunneling. 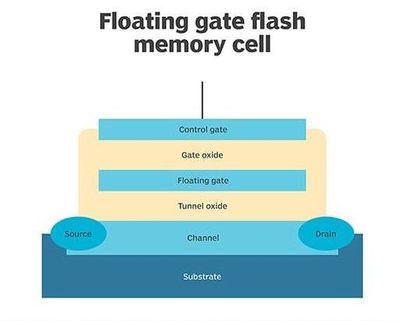 Data is erased via a strong negative charge on the control gate. This forces electrons into the channel, where a strong positive charge exists.

Flash works using an entirely different kind of transistor that stays switched on (or switched off) even when the power is turned off. A normal transistor has three connections (wires that control it) called the source, drain, and gate. Think of a transistor as a pipe through which electricity can flow as though it's water.

One end of the pipe (where the water flows in) is called the source—think of that as a tap or faucet.

The other end of the pipe is called the drain—where the water drains out and flows away.

When you switch the power back on, the transistor is still off, and since you can't know whether it was on or off before the power was removed, you can see why we say it "forgets" any information it stores.

Even if the power is turned off, the electricity is still there between the two gates. That's how the transistor stores its information whether the power is on or off. The information can be erased by making the "trapped electricity" drain back down again.

1. Flash memory wears out over time. Inside the memory chip, bits of data are stored on cells. Each time data is erased from or written to a cell, it causes wear. Over time and repeated cycles of writing and erasing, the cells degrade and eventually become unusable.

2. Typical file system software can cause data fragmentation. While built-in features reduce fragmentation, this phenomenon still causes a decrease in performance over time. That’s because the system has to jump around the memory layout to read or write all the bits of data that form a file.

Samsung's Contribution and innovation in this Technolgy:

-September 2006, Samsung announced the development of PRAM -- Phase-change Random Access Memory. This new type of memory combines the fast processing speed of RAM with the non-volatile features of flash memory, leading some to nickname it "Perfect RAM." PRAM is supposed to be 30 times faster than conventional flash memory and have 10 times the lifespan

-In 2013, Samsung  formally launched 3D flash ("stacked") technology in which dozens of different layers of memory cells can be grown on the same silicon wafer to increase storage capacity (just like the multiple floors of a high-rise office block let us pack more offices into the same area of land). Instead of using floating gates (as described above), 3D flash uses an alternative (though sometimes less reliable) technique called charge-trap, which allows us to engineer much higher capacity memories in the same amount of space, well into the terabit (Tbit) scale (1 trillion bits = 1,000,000,000,000 bits).

[Also the Future Trends are favouring this]

For Comparison :  Samsung’s previous 512GB unit and has read speeds of up to 1,000 megabytes a second; that’s 10 times the speed of a typical microSD card. 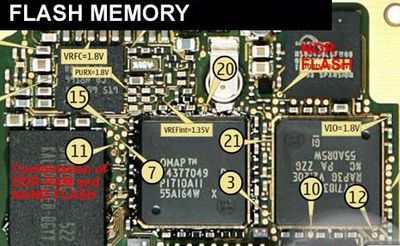 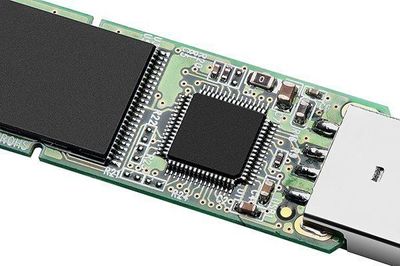 -Thank You For Your Support.

-Referenced from my Old books about Microchips and website SearchStorage

-To know more about Flash Memory [non-volatile memory (nvm)] developments, forecasts and information: flash memory summit's are held every year and you can follow them. Next Summit might be scheduled in August,2020.