YashAgarwal
Active Level 10
Definition - What does Flash Memory mean?
Flash memory is a non-volatile memory chip used for storage and for transfering data between a personal computer (PC) and digital devices. It has the ability to be electronically reprogrammed and erased. It is often found in USB flash drives, MP3 players, digital cameras and solid-state drives.
Flash memory is a type of electronically erasable programmable read only memory (EEPROM), but may also be a standalone memory storage device such as a USB drive. EEPROM is a type of data memory device using an electronic device to erase or write digital data. Flash memory is a distinct type of EEPROM, which is programmed and erased in large blocks. 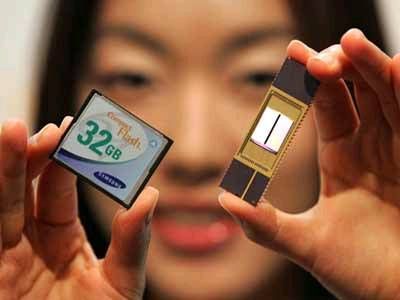 An employee of Samsung Electronics shows a 32-Gigabyte NAND memory card and chip.
Here are a few examples of flash memory:

How flash memory works—a more complex explanation
That's a very glossed over, highly simplified explanation of something that's extremely complex. If you want more detail, it helps if you read our article about transistors first, especially the bit at the bottom about MOSFETs—and then read on.
The transistors in flash memory are like MOSFETs only they have two gates on top instead of one. This is what a flash transistor looks like inside. You can see it's an n-p-n sandwich with two gates on top, one called a control gate and one called a floating gate. The two gates are separated by oxide layers through which current cannot normally pass: 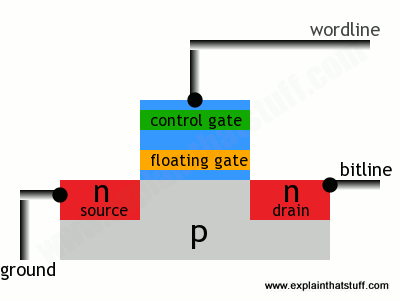 In this state, the transistor is switched off—and effectively storing a zero. How do we switch it on? Both the source and the drain regions are rich in electrons (because they're made of n-type silicon), but electrons cannot flow from source to drain because of the electron deficient, p-type material between them. But if we apply a positive voltage to the transistor's two contacts, called the bitline and the wordline, electrons get pulled in a rush from source to drain. A few also manage to wriggle through the oxide layer by a process called tunneling and get stuck on the floating gate: 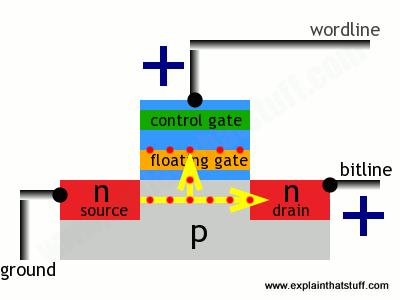 The presence of electrons on the floating gate is how a flash transistor stores a one. The electrons will stay there indefinitely, even when the positive voltages are removed and whether there is power supplied to the circuit or not. The electrons can be flushed out by putting a negative voltage on the wordline—which repels the electrons back the way they came, clearing the floating gate and making the transistor store a zero again.
Not an easy process to understand, but that's how flash memory works its magic!
Who invented flash memory?
Flash was originally developed by Toshiba electrical engineer Fujio Masuoka, who filed US Patent 4,531,203 on the idea with colleague Hisakazu Iizuka back in 1981. Originally known as simultaneously erasable EEPROM (Electrically Erasable Programmable Read-Only Memory), it earned the nickname "flash" because it could be instantly erased and reprogrammed—as fast as a camera flash. At that time, state-of-the-art erasable memory chips (ordinary EPROMS) took 20 minutes or so to wipe for reuse with a beam of ultraviolet light, which meant they needed expensive, light-transparent packaging. Cheaper, electrically erasable EPROMS did exist, but used a bulkier and less efficient design that required two transistors to store each bit of information. Flash memory solved these problems.
Toshiba released the first flash chips in 1987, but most of us didn't come across the technology for another decade or so, after SD memory cards first appeared in 1999 (jointly supported by Toshiba, Matsushita, and SanDisk). SD cards allowed digital cameras to record hundreds of photos and made them far more useful than older film cameras, which were limited to taking about 24–36 pictures at a time. Toshiba launched the first digital music player using an SD card the following year. It took Apple a few more years to catch up and fully embrace flash technology in its own digital music player, the iPod. Early "classic" iPods all used hard drives, but the release of the tiny iPod Shuffle in 2005 marked the beginning of a gradual switchover, and all modern iPods and iPhones now use flash memory instead.
What's the future for flash memory?
Flash has rapidly overtaken magnetic storage over the last decade or so; in everything from supercomputers and laptops to smartphones and iPods, hard drives have increasingly given way to fast, compact SSDs (solid-state drives) based on flash chips. That trend has been driven by—and helped to drive—another one: the shift from desktop computers and landline phones to mobile devices (smartphones and tablets) and cellphones, which need ultra-compact, high-density, extremely reliable memories that can withstand the stresses and strains of being thrown around in our backpacks and briefcases. These trends are now favoring 3D flash ("stacked") technology, developed in the early 2000s and formally launched by Samsung in 2013, in which dozens of different layers of memory cells can be grown on the same silicon wafer to increase storage capacity (just like the multiple floors of a high-rise office block let us pack more offices into the same area of land). Instead of using floating gates (as described above), 3D flash uses an alternative (though sometimes less reliable) technique called charge-trap, which allows us to engineer much higher capacity memories in the same amount of space, well into the terabit (Tbit) scale (1 trillion bits = 1,000,000,000,000 bits).
Thanks for Reading
#GalaxyTechFluencer
2 Likes
Share
Comment