The all new AI powered Game Booster is here!!

Do you know about AI Game Booster?
You get unmatched gaming performance in the palm of your hand, on your own Galaxy devices [Galaxy Note 10 onwards, available on all devices such as A50s, A30s, M30s ]. AI analyses your gaming habits run-time to deliver a better experience whether you are into hard-core or casual gaming. The game is optimized for best balance of battery life, performance and temperature using run-time AI. Playing casual games such as Subway Surfers will result in increased battery life whereas playing graphic intensive games such as PUBG Mobile will result in improved performance in terms of higher frame-rate and stability (continuously getting high frame-rate, over a period of time), all this at an acceptable temperature. 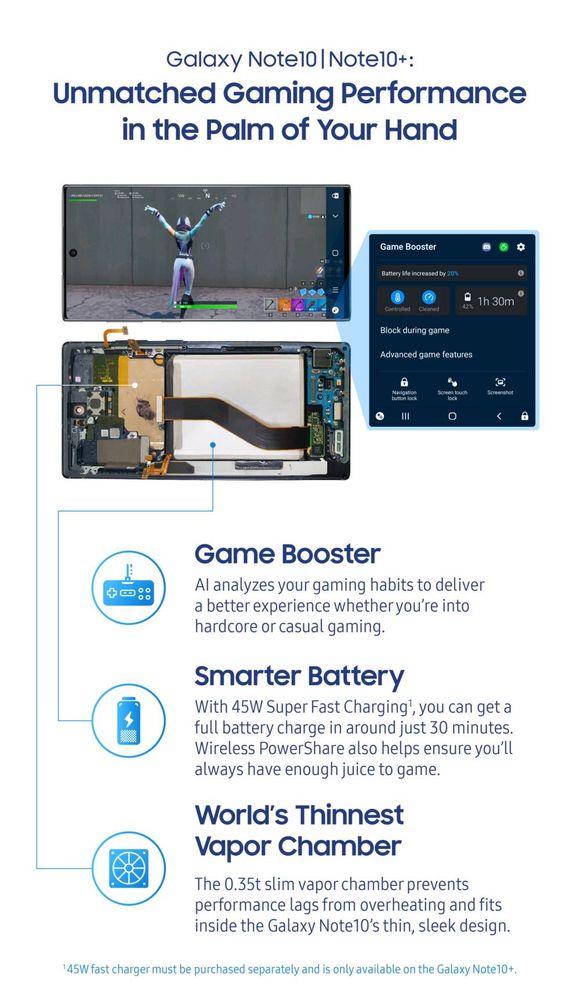 How AI helps to improve gaming experience? Thermal control with high performance is very important for 3D graphics intensive games. But the requirements of high frame-rate and lower temperature are conflicting goals. The system resources such as CPU & GPU need to process heavy loads consistently to deliver high frame-rate, which in turn could cause the device to heat up and thereafter system could be throttled to achieve cooling. This will cause frame drops and poor stability. This is how traditional thermal control systems are designed to work. To overcome these limitations, Machine Learning is used to build a system which learns continuously and adapts for different game, gamer and device behaviours and automatically finds trade-offs between temperature and performance dynamically at runtime. It works via on device learning automatically for all devices and games without the need for any external (offline) learning and tuning. Benefits upto 20% improved battery life(during gaming) or performance (frame-rate & stability) can be expected while playing many popular games such as PUBG Mobile.

How to access game booster?
Game Booster is a hidden app that cannot be accessed on its own unless you’re playing a mobile game. Also worthy of note is that Game Booster doesn’t require you to launch a game from the Game Launcher. It works independently from it, and you can always access Game Booster from the notifications shade when running a mobile game.

What’s new?
Sometimes, games can get very intensive and generate very heavy workloads for the CPU & GPU. Repeated and prolonged durations of high intensity gaming will leave no room to manoeuvre the regular system resources, namely the CPU & GPU. At such instances, other avenues that generate heat and contribute to throttling and looked at, such as screen brightness, volume and other components. For this Samsung developed Auto control feature in Game Booster.
Auto control: Automatically reduces the brightness and volume whenever the phone gets too hot while playing games. Background apps will also be closed when memory is low. This ensures your game does not lag due to lack of memory. By reducing the brightness and volume gradually, some head room is created to keep up the higher clocks for CPU & GPU. This ensures sustained smooth game play at acceptable temperature levels. These new features are in addition to already existing useful tools in Game Booster. The Do Not Disturb feature ensures that you do not get disturbed while you are deeply immersed in your game-play. All your calls and messages can be configured to go unnoticed. Calls can also be directly answered hands-free, if need to be attended. Other features like taking a screenshot or recording a video clip showing your gaming prowess can be easily accessed from the shortcut button over the navigation bar. You can also include your face and commentary using the front- camera while recording the game-play video. You can also get realistic Dolby Atmos sound automatically when you play games.
Features available in Game Booster Calls and notifications:
Minimize caller notifications or don't show them at all. Tap Block during game to access this group of settings.
Block during game: Customize what features work or turn off certain alerts while you're playing a game. That way any distractions while you’re in the middle of a battle. Advanced game features: Popup panel shows your recent apps so you can access them quickly, and Auto screen lock prevents accidental screen touches by locking the screen automatically when a game is opened.
Navigation button lock: This deactivates the Navigation bar when a game is open, so you don’t accidentally touch Home or Back and then exit the app by mistake.
Screen touch lock: Pauses the game and locks the screen. Swipe to unlock the screen and return to the game.
Screenshot: Capture screenshots of your gameplay.
Record: Record your game session. You can use the Screen recorder option in Quick Settings instead.
Settings: Access Game Tools or Game Booster settings. Phone performance: See your phone's current memory usage, temperature, and battery life.
# some features may not available in all devices.
2 Likes
Share
Comment