Carrier aggregation is a technique used in wireless communication to increase the data rate per user, whereby multiple frequency blocks (called component carriers) are assigned to the same user. The maximum possible data rate per user is increased the more frequency blocks are assigned to a user. The sum data rate of a cell is increased as well because of a better resource utilization. In addition load balancing is possible with carrier aggregation. Channel selection schemes for CA systems taking into account the optimal values for the training length and power, the number of the probed sub-channels and the feedback threshold such that the sum rate is also important for optimal achievable capacity.
Types of carrier aggregation 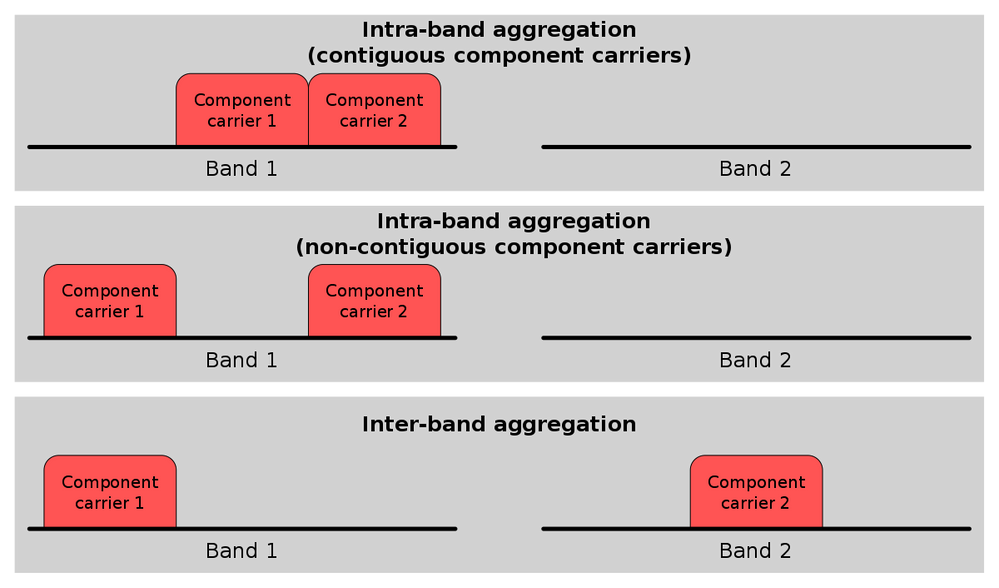 Depending on the positions of the component carriers three cases of carrier aggregation are distinguished:

There is no difference between these three cases from a baseband perspective. However, the complexity from an RF point of view is increased in the case inter-band carrier aggregation.

The chanel bandwidth for UMTS/HSPA+ is about 3.8 MHz with a carrier spacing of 5 MHz. Carrier aggregation is also called Dual Cell in the context of UMTS/HSPA+.

LTE supports since its first release channel bandwidths of 1.4 MHz, 3 MHz, 5 MHz, 10 MHz, 15 MHz and 20 MHz. Since LTE-Advanced Rel. 10 any two channels (of possibly different bandwidths) may be aggregated and be assigned to a single user. A difference between two aggregated 10 MHz component carriers and a single ordinary 20 MHz channel is that in the case of carrier aggregation the control information are transmitted on both component carriers.

LTE Advanced with carrier aggregation allows Gigabit LTE. This is made possible through higher order modulation (256QAM), carrier aggregation and 4x4 MIMO. Since LTE Release 10 up to 5 component carriers may be aggregated, allowing for transmission bandwidths of up to 100 MHz. Using five aggregated component carriers, MIMO and 256QAM allows theoretical data rates of up to 2 gigabits per second. A management architecture that can aggregate particular systems, networks, and terminals in view of better managing the collection of available resources on a heterogeneous system level, taking into account all systems', networks', and terminals' traffic requirements and technical capabilities is considered for LTE-A system with potential deployment to 5G.