Bixby Routines review: A background feature that changes your experience 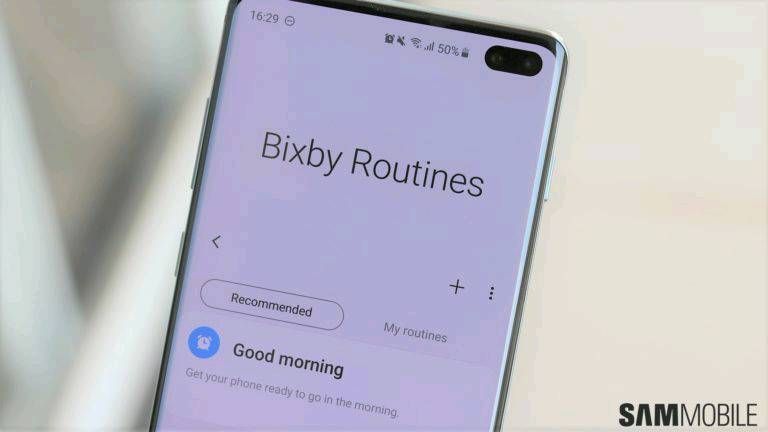 Bixby Routines is available on a wide variety of Galaxy smartphones, and it’s a feature specific to the user experienced tailored by Samsung for its customers. In other words, it’s part of the company’s proprietary software suite – an offshoot of the Bixby ecosystem and Good Lock – as opposed to a component of the Android operating system. Other OEMs and even third-party developers offer more or less similar tools, but Bixby Routines is available only on Galaxy products.
We’ve talked about Bixby Routines on numerous occasions before for various reasons, but we never gave Bixby Routines an in-depth review and we’re changing that now. We’ll try to answer all there is to know about Bixby Routines in this review. If you’re new to the Galaxy ecosystem or if you have a history with Samsung products but you haven’t given this feature a second thought, consider this your introduction to Bixby Routines.
What exactly is Bixby Routines?
Samsung describes Bixby Routines as a feature bolstered by machine learning to adapt to your life. But although the app has a machine learning component that relies on Samsung’s Customization Service, this is only one part of the whole Bixby Routines experience. And, in my opinion, the machine learning component is not Bixby Routines’ biggest selling point, as you’ll be able to tell from this review.
Bixby Routines follows the IFTTT (If This Then That) principle to create automated tasks, a.k.a. chains of conditional statements according to the user’s habits throughout the day. More importantly, it lets users create their own automated tasks (or routines) without having to rely on the machine learning component.
In essence, Bixby Routines lets you program your phone to perform certain tasks/actions automatically when specific conditions are being met. Various If conditions and Then actions/tasks can be determined by users, and they come together to create a so-called routine that runs on your phone in the background when enabled. Routines can be based on a variety of contexts such as the time of day, location, a certain app being launched, a mobile game being played, an accessory being connected to the smartphone, and more. Once again, these parameters can be determined by the machine learning component (to a relatively small degree) and/or by the users.

How useful is Bixby Routines in the real world?
This might be the type of question that leads to multiple answers, particularly when separating the machine learning component from the rest. In our experience, Bixby Routines doesn’t quite excel when left alone to its own devices, but rather when you dig deeper into this feature to create routines on your own.
Before we even thought of writing this Bixby Routines review, I found the machine learning component to be somewhat useful in offering some inspiration for creating new routines, but not much else. The suggestions made and displayed by Bixby Routines in the Discover tab can be varied, but they don’t necessarily feel like they’re backed by machine learning or that they’re precisely tailored to fit the way you interact with your phone. In reality, they seem more like vague suggestions for new chains of conditional statements that you may or may not want to create and use in practice.
For me, the one suggestion that I added to my Routines repertoire was Focus on your writing; a routine that I never thought of creating on my own. It prevents the Air command menu to be summoned by pressing the Galaxy Note 10 S Pen button when using Samsung Notes.
However, once you do get to experiment with all the Ifs and Thens offered by Bixby Routines, you realize the extent to which this tool can change the way you interact with your phone if you rely less on the Discover tab and more on your own routines. This change is not necessarily fundamental but it prompts the question as to whether or not you could ever go back to a phone that lacks these types of automated tasks. And, in some cases, it can truly improve aspects of your phone’s hardware. Not long before writing this Bixby Routines review, we learned we can use this tool to run 120Hz and power saving mode simultaneously on the Galaxy S20 series – something that’s not available by default.
‘Bixby Routines is more than the sum of its parts’
A few examples of simple routines that can improve quality of life are:
• Setting a Spotify playlist to play automatically when you open a different app – say, a workout app.
• Tell your phone to close all video-playback apps at nighttime if the phone reaches a certain battery level and it’s unplugged.
• Program your phone to perform certain automated tasks at different times of day and/or in different locations, like switching to vibrate mode when you reach your favorite movie theater.
• Have different lock screen shortcuts at different times of day and/or in different locations.
• Change the way notifications behave, or even change the screen settings automatically when playing mobile games, and a whole lot more.
The beauty of these routines is that they are not limited to just one If condition and Then action. Multiple conditions and actions can exist in a single routine so, for example, you can further improve your workout app routine by preventing the aforementioned Spotify playlist from playing automatically when you open the workout app unless you’re at the gym. Or you can also add an additional action to the routine, essentially telling your phone to read messages out loud (or enable DND) when you’re working out.

These routines might not mean like much when judging them independently. But keep in mind that you can have countless routines for different purposes. They can be enabled or disabled individually without having to turn off Bixby Routines altogether, and all the routines you may be running add up to improve your experience throughout the day. Bixby Routines became a part of my day-to-day experience, and once that happened, I never wanted to go back.
What are the best qualities and worst shortcomings of Bixby Routines?
Aside from the automated tasks themselves, Bixby Routines’ best quality lies in its simplicity and clean interface. From my experience, it’s virtually impossible to create a contradictory chain of conditional statements. In other words, any routine you can create is going to be functional, regardless of how simple/complex and useful/banal it might be.
The Discover tab that includes routine suggestions acts as a good starting point if nothing else, and existing routines are neatly organized. Each one has its own On/Off toggle, meaning that you don’t have to disable the entirety of Bixby Routines if you want to put a certain routine on hold. Likewise, each routine has its own independent toggle for turning running notifications On or Off.
I feel like the main shortcoming of Bixby Routines is not necessarily an issue with the tool itself, but rather something I’d like Samsung to implement. Namely, the ability to use an existing routine’s On and Off status as an If condition for a completely new routine. The tool also lacks any options to customize a routine’s background image or to resize the list of routines (seen in the screenshot below). This isn’t much of an issue, as you rarely interact with the Bixby Routines UI itself once you’ve created your routine portfolio, but it would be nice to see more UI customization options in the future.

Conclusion
I’d like to close this Bixby Routines review by highlighting one key element; Bixby Routines is the type of of tool that you rarely interact with directly, but it can become a big part of your user experience once you set the right routines for your use cases. And in this regard, it’s brilliant. There’s a saying that goes something along the lines of good design is usually unnoticed, meaning that a well-designed tool or set of features should be well integrated into the user experience and make a real difference without it being at the forefront or it being the main focus. Bixby Routines achieves this with great ease.
As you can hopefully tell from this review if you haven’t used Bixby Routines before, this tool is easy to use but relatively complex, it’s completely foolproof – at least from my experience before and throughout this review – and it keeps getting better with new updates. It’s not perfect, and it could be even better with just a couple of additions, but it’s a fantastic IFTTT-based toolset available on most mid-range and all flagship Galaxy phones out-of-the-box.
Source:
https://www.sammobile.com/news/bixby-routines-review-background-feature-changes-your-experience/amp/...
1 Like
Share
Comment