Others
Samsung may have indirectly teased two eventual devices. On Samsung Display’s blog, the company has released two sketches of new devices that could plausibly arrive as a real Samsung device in the coming years.

In the first illustration, a device with a tri-folding display reimagines the Galaxy Fold. This new design would eliminate the Fold’s need for an external display, as it could fold down to a third of its unfolded footprint and only use the top section of the screen. The small logo at the bottom of the sketch reads “Samsung OLED”.

The next drawing imagines a rollable display that stows away into the size of a tube.

This concept of a rollable display that can stow away into a small footprint can be very attractive, but the only apparent limitation seems to be that such a delicate display might only be possible to use on a desktop surface. The attraction here is the ‘portability’ more than the ‘mobility’ of such a product.

Although Samsung isn’t explicitly announcing that it would release devices like these imagined, it’s certainly painting the idea that Samsung Display is capable of making panels for such devices.

One of the devices might be a reality sooner than later. A patent for the former tri-folding device was re-imagined by LetsGoDigital in the form of a few mock up renders. This tri-folding device would feature a slide-out keyboard and could be used in different positions.
We’re excited to see how far manufacturers will push devices’ form factors as we continue to enter a new age of hardware innovation. Do you see yourself ever using a device like one of these? 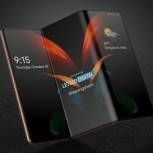