If Real Racing 3 is a precision instrument, then Asphalt 8: Airborne is a lump hammer. 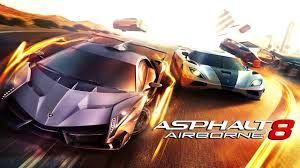 Where Firemonkeys' racer tuts at you when you so much as graze the bodywork of your expensive supercar, Gameloft's latest rejoices in such carnage and destruction.

Driven into some scenery? Have a nitro boost. Somehow managed to spin your car 360 degrees in the air, land it on its wheels, and keep on racing? Someone deserves a nitro boost. Plowed into an opponent, pushing them off a bridge to a watery grave? Nitro, nitro, nitro.

There's a simple arcade glory to the proceedings, which leaves you with a smile on your face after every breathtaking dash to the line. So while Asphalt 8: Airborne might not be subtle, every second you spend in its company is exhilarating fun.

The single-player campaign is cut up into manageable chunks, accessed through an occasionally dizzying array of menus. It boils down to this though - finish races, earn credits, buy more powerful cars.

Each season of your single-player career is hacked up into a variety of challenges. Some are straightforward races, others are about barging people off the road, or making sure you're not last when a ticking clock gets to zero.

The tracks are all brilliantly designed and packed full of shortcuts, ramps, and, in one case, a careening biplane. There's always something new to see, or a new alley to explore, or a new jump to drive off.

There are many different control methods for you to tinker around with, some of them involving automatic acceleration, and others requiring a button tap to go faster.

They all work reasonably well, but you'll want to tweak the sensitivity of the tilt controls to find the right balance between precision and not having to tilt so far you fall over.

There's also a clever triple-tap nitro system which gives you speed bonuses if you touch the screen at just the right time, and a simple drift mechanic that takes practice to master means you'll spend a lot of time sideways and grinning.

The environment plays a pivotal role, too.

In a Tokyo race, I was the last to enter a tunnel but watched with glee as the cars in front of me were taken out by traffic, posts, and a wall, while I managed to burst out of the other end of the tunnel on my roof, and in the first place.

The carnage carries on into the online multiplayer as well. Races are tough, especially if you end up in a group at a similar level, and staying at the front of the pack can be a nerve-racking experience as you watch your opponents closing in.

Knowing the shortcuts here can be the difference between victory and teary-eyed defeat, so it's worth learning the tracks in a single-player before you go online. Cars and upgrades are available in both modes, so your successes offline will help you online.

Asphalt 8: Airborne might not be the best-looking racer out there, and it certainly isn't the most realistic, but as an arcade blast it's hard to top. Its powerslides are that bit madder, its jumps that bit more ludicrous, and its takedowns that more satisfying than its nearest competitors.

This is a racer that concentrates on fun above anything else, and it hits its mark almost every time. If you're a fan of gaming with a grin on your face, then Asphalt 8: Airborne is going to be right up your street.