Samsung tends to introduce new software services with its flagship smartphones and it appears that the company has one up its sleeve for the Galaxy S20. A new report has detailed Samsung Quick Share, a local file-sharing service for Galaxy smartphones and tablets that not unlike Apple’s AirDrop.

The underlying mechanics are most likely the same, in that Quick Share will use Bluetooth to create a peer-to-peer Wi-Fi network between connected devices. The connection would likely be firewalled for security and the files would be encrypted. Other existing solutions use Bluetooth only or a combination of Bluetooth and NFC, but Wi-Fi certainly takes the cake when it comes to both range and speed.

The folks at XDA Developers obtained an APK of Quick Share from someone with access to a Galaxy S20+. They were able to install the app on a Galaxy Note 10+ as well. The app did run but file transfer wasn’t possible as the APK is understandably not meant for any other device in its current form. 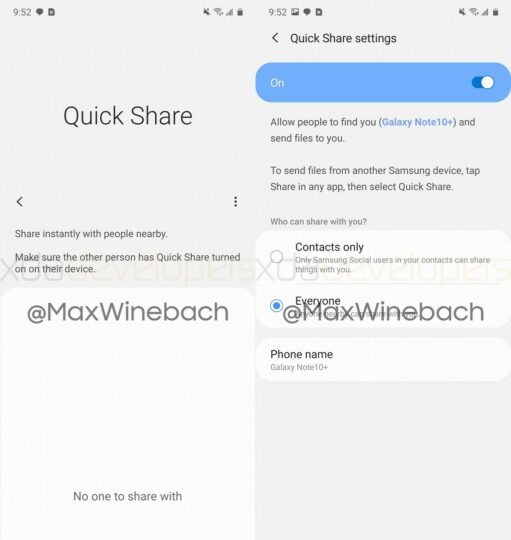 Quick Share will work in the same way as other local sharing services. If someone with a supported device is nearby, their device will show up as available and you will be able to send them a file, photo or video, and vice versa. If you don’t want random people sending you Quick Share requests, Samsung has built a feature that will only let through requests from Samsung Social users who are in your contacts.

The feature will also offer additional functionality compared to AirDrop. It will be possible to temporarily upload files to Samsung Cloud from your smartphone or tablet in order to stream them on devices like smart TVs. This feature makes perfect sense as Samsung is one of the largest TV vendors on the market and it can leverage that scale to make it easier for mobile device owners to share their content on Samsung TVs.

It’s quite likely that Samsung is going to launch Quick Share with the Galaxy S20 series next month. The company may eventually expand it to other devices as well, possibly with the One UI 2.1 update. What do you think about Quick Share? Does it sound like a service that you see yourself using often? 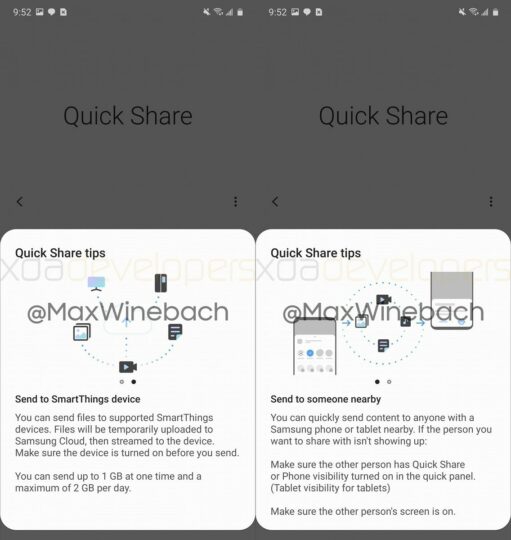