Less than three weeks ago, Samsung released Android 10 and One UI 2.0 for the Galaxy S9 and Galaxy S9+. Now, it’s rolling out the first minor update to the two phones after they were updated to Android 10. The new update, sporting build number G96xFXXS7DTAD, is rolling out in a number of European countries, including Germany, Switzerland, Austria, Spain, Portugal, and the Netherlands. It will probably be released in more markets soon.

The update is quite basic and only brings the February 2020 security patch. If you had issues or bugs on your Galaxy S9 or S9+ after updating to Android 10, there’s a good chance they haven’t been fixed in the new update. This was also the case for the first software update Samsung released for other flagships after updating them to Android 10, suggesting that Android 10 doesn’t have many issues the company deems to be serious, though the opinion of those who actually use these phones will no doubt vary.

If you own a Galaxy S9 or S9+, you will be notified of the update once it is available for your device. You can also force the update to show up manually by tapping the Download and install option in the phone’s Settings » Software update menu. If that doesn’t work, you can update your phone by flashing the latest firmware on it using a Windows PC. You can download Galaxy S9 and S9+ firmware from our firmware archive. 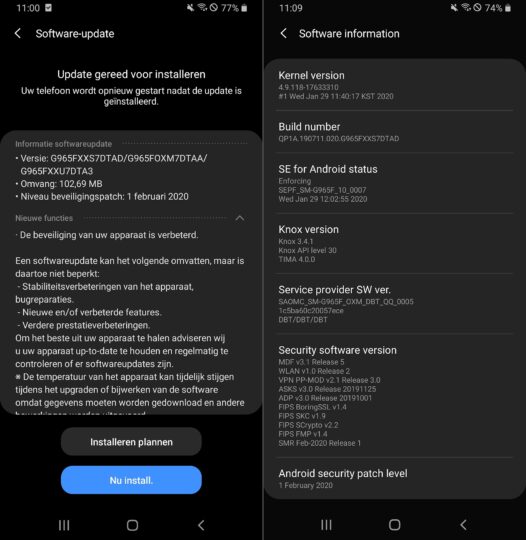