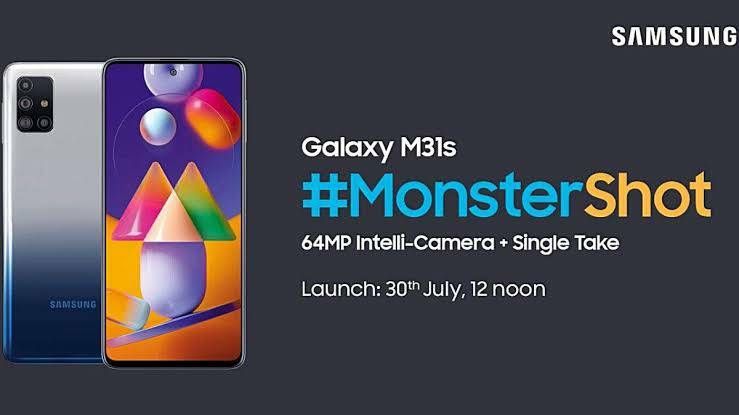 Samsung launched the Galaxy M31s smartphone in the ‘M Series’ in India last month as the successor of the M31 that was launched earlier this year. This comes with upgraded camera, Infinity-O AMOLED display, 25W fast charging and 128GB storage as a standard.
Box Contents
Display, Hardware and Design
Samsung has finally moved from the Infinity U display from earlier M series models to a 6.5-inch Full HD+ Infinity-O Super AMOLED display with a resolution of 1080×2400 pixels at about 404 PPI, aspect ratio of 20:9. The display looks bright, thanks to 420 nits brightness, offers good color reproduction and the sunlight legibility is good as well. Since it has an AMOLED panel, it offers true blacks. The screen is protected by Corning Gorilla Glass 3.
Similar to the other Samsung phones, there is Blue light filter that is said to reduce eye strain by limiting the amount of blue light emitted by the screen, You can set it for sunrise to sunset and also set a custom schedule. You can change font size and style and select apps that you want to use in the full screen aspect ratio. There is also dark mode, which looks great on the AMOLED screen. The phone doesn’t have DC dimming or low brightness anti-flicker mode that is present in some AMOLED screen phones in the price range. I didn’t notice any screen flicker issues in low brightness on the phone.
It doesn’t have notification LED, but there is Always on display with tap to show option that shows the AOD screen for 10 seconds after you tap the screen. You can also set a schedule. There are a lot of options to choose from such as clocks, GIF or you can download any AOD from Themes section.
On the top, there is an 32-megapixel camera in the tiny punch-hole and the earpiece is present on the top edge. There is also a tiny space in the top left corner for the proximity sensor and the phone also has an ambient light sensor. It has gyroscope and magnetic sensor, otherwise known as magnetometer for VR. There is a small chin below the screen.
The phone has shiny plastic frame which attracts fingerprints, but it doesn’t slip out of your hands easily. On the right side, there is a fingerprint sensor, which doubles up as a power button, just below the volume rockers. On the left side there is a single tray that houses dual nano SIM slots and a microSD card slot that accepts cards up to 512GB. At the bottom, there is a 3.5mm audio jack, USB Type-C port, loudspeaker grill and the primary microphone.
On the back, there is a quad camera module arranged in a rectangular array. There is single LED flash next to the camera module. Even though the phone has a huge 6.5-inch screen, it is compact to hold. It is 9.3mm thick compared to 8.9mm M31 and weighs 203 grams, compared to 191g M31. The glasstic back has a gradient design, which attracts fingerprints and smudges easily. It is prone to scratches on the right side with day-to-day use, but it is not as bad as earlier M series phones. It is recommended to get a case since Samsung doesn’t provide one in the box. The overall the build quality is decent, but it can’t be compared to Samsung’s A series phones. It is not splash resistant like some phones in the price range.
Camera
It has a 64-megapixel rear camera with Sony IMX682 sensor, 0.8μm pixel size and f/1.8 aperture, compared to Samsung GW1 ISOCELL Bright sensor in the predecessor. The secondary camera is now a 12-megapixel ultra-wide sensor, compared to 8-megapixel ultra-wide lens in the M31. The 5-megapixel depth sensor and a 5-megapixel macro sensor with f/2.2 aperture is retained. The phone has a 32-megapixel camera on the front with Sony IMX616 sensor with f/2.2 aperture. There is Live Focus that makes use of the 5-megapixel depth sensor. You can also adjust the bokeh effect before or after the shot. There is selfie portrait option for the front camera that uses software to blur the background. There is also a wide-angle option for the front camera.

It has Auto mode, Food, Night, Panorama, Macro, Pro, Live Focus, Super Slow-mo, Slow motion and Hyperlapse as well as Pro mode to adjust ISO, shutter speed, focus, white balance and exposure manually. You can choose 64MP option from the aspect ratio settings on the top. It also has AR stickers that lets you add stickers. It also has scene optimizer, which is AI mode that automatically detects modes and you can also enable auto HDR option.

There is a Single Take feature that takes 7 photos and 3 videos with a tap for up to 10 seconds footage. The phone has partial Cam2API support and there is no RAW support for Exynos devices.

Coming to the image quality, daylight shots are way better than the M31, and the camera captures a good amount of detail, creates well exposed photos with good dynamic range and detailing, and dynamic range can further be improved enabling HDR mode from the settings, which automatically turns on HDR when needed.

Even though the phone has a 64-megapixel sensor, the final output has 16-megapixel resolution, which is common in phones with large sensors. Autofocus speeds are fast and accurate. Ultra-wide shots from the 12MP camera is good in daylight. Even though the edges look a bit curved due to the ultra-wide lens, ‘Shape Correction’ is automatically applied that automatically crop the edges, still some images look a bit curved at the corners, which is common in wide-angle lenses.

Macro shots from the main camera is good, and there is a dedicated macro mode, but there is no touch to focus option in this mode so it is hard to focus. Live focus is good at detecting the edges. Low-light performance is good, which can be improved further with Night mode that offers more details, but you need to keep your hand steady, since it takes two to three seconds to process. However, images shot using night mode are zoomed, and are captured in 8-megapixel resolution compared to 16-megapixel. 64-megapixel shots have good amount of details, but the colours are not vibrant, and the images are about 10MB in size. Images with flash is good.

It can record videos at maximum 4K resolution at 30 fps from both front and back cameras. There is also 1080p 30fps both in main and wide-angle camera, but there is no 1080p 60fps option, which is a restriction due to processor. It can shoot slow motion at 720p at 480fps and there is also super slow motion, which shoots an 8-second video with 6 seconds of slow motion, and also lets you add custom music for the slow motion part. You can also enable EIS for 1080p videos. Video quality is good, and the audio crisp since it has a secondary microphone.

The 6000mAh battery offers brilliant battery life that lasts more than a day with heavy use. With average use it lasted close to three days. I got about 8 hours of screen on time during my use with use of camera and social apps like Instagram, YouTube playback, Chrome browsing etc. mostly on Wi-Fi and occasional 4G use for close to 3 days. Adaptive battery saving and other options will let you increase the battery life, but the performance might be affected.

In our One Charge rating, the Samsung Galaxy M31 scored 18 hours and 54 minutes, which is almost same as the M31. Samsung has offered USB Type-C and 25W fast charging, an upgrade from the usual 15W chargers. Charging with the bundled charger about 1 hours and 50 minutes to reach 100% from 0%, and 0 to 50% took about 50 minutes, which is good for a phone with a 6000mAh battery.

Overall, the Galaxy M31s, is a worth upgrade to M31 at a slightly higher price compared to the predecessor. It has upgraded cameras, better Infinity-O AMOLED display and 25W fast charging while retaining the huge 6000mAh battery. Glass back, lack of splash-resistant body, Samsung Pay are few things that needs to be compromised.

NileshMalav
Active Level 3
M series is prank to its users
it not have full one UI
and many issues and bugs
1 Like
Share
Reply
Reply
Loading...
Highlighted