Sciphile
Active Level 10
Visually Appealing but flawed to its core
Yesterday Samsung pushed Android 10 Update for M30s users. The update brings the followingchanges to your smartphone.

There is no major change that is noticeable other than the UI which has been tweaked a little bit.
Personally I like the UI overhaul in certain places but it's subject to your own taste, some of you may be loving it others might not, so no point in talking about it.
In this review we will be looking mainly at important stuff or issues that some of you might be facing. I will be talking mostly about the
1. Performance &
2. Battery life after the update.
Starting with the performance, right after I updated my device to Android 10, the animations became a bit choppy instead of smooth. Opening apps and switching between different apps became painful.
Camera was not turning on and on top of that the device started heating with normal usage.
So, I had to perform a factory reset thinking it might solve these issues and I'm glad that it did.
The animations became buttery smooth, device didn't heat up on normal usage like it did after updating, camera app was opening properly and not crashing as it did before.
The new navigation gesture is also a welcomed addition, it takes some time to get used to it but it works well everytime.
The second thing I noticed that improved was the fingerprint scanner, my god it was painful to unlock this device before this update because the fingerprint scanner was so slow to read your fingerprints or it didn't work at all sometimes but after the update the phone unlocks instantaneously with the fingerprint sensor it's not slow as it used to be before. Do let me know if you noticed it too.
Next thing I noticed was not a feature but an issue, the flashlight and the HDR option is disabled for the 48 Mp shooting mode. I don't know whether its actually a bug or Samsung removed it on purpose, whatever the reason, but atleast they should have let us known as to why those things have been disabled. They used to work well before with the 48 Mp shooting mode.
Next thing that I want to talk about is the battery, charging time is still the same and battery seems to be holding up pretty good. The idle battery drain is about  0.6% per hour (with wifi, mobile data and location services switched off)

But there's one issue with the way the battery stats is being shown in the device care menu, it doesn't seems to be reliable.
Samsung should have kept the old way of displaying battery stats which used to resets itself after a full charge but instead now it shows data on a daily usage basis which varies from time to time for some reasons and mixes up the usage data in between frequent charges
This is the usage details for the Call of Duty Game I played, notice how it says that it used 18.3% of the battery. 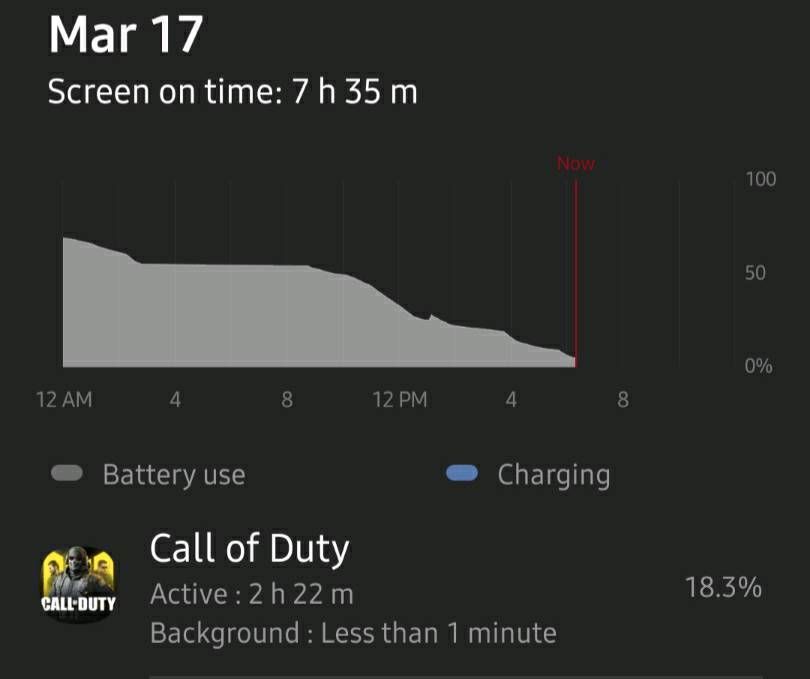 But when I charged my device after that the software says that it used 17.3 % of the battery. 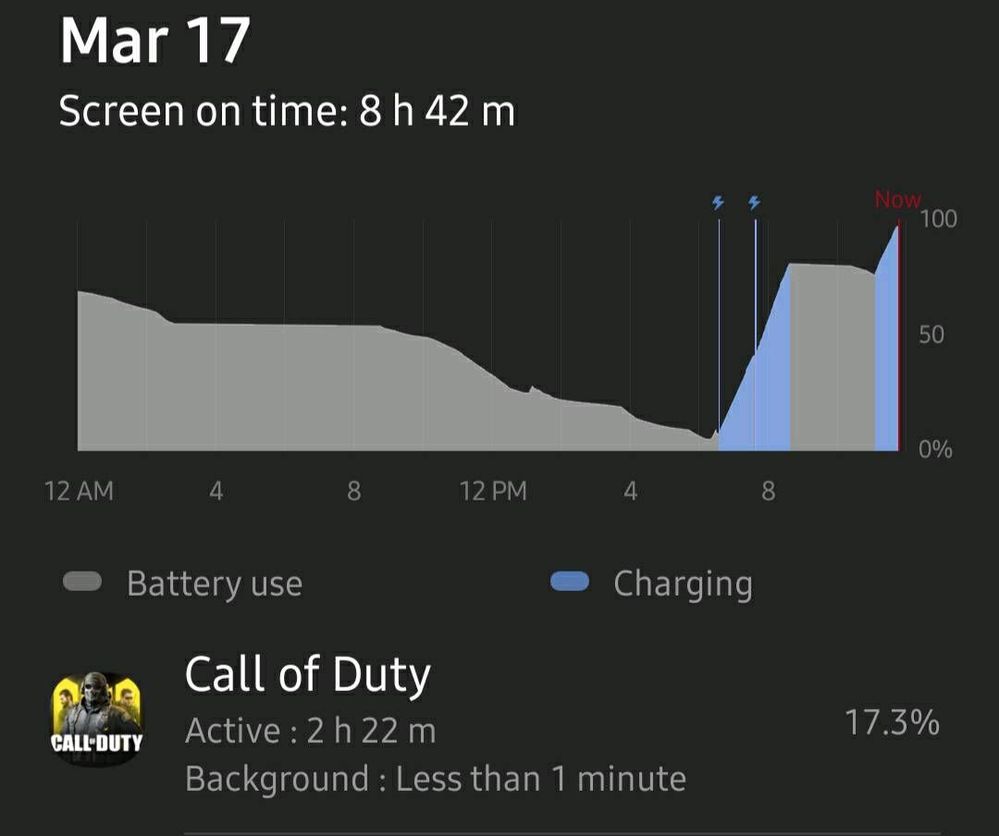 The device is calculating battery usage on daily basis and not since last full charge.
To put in a simple way, the game didn't used 18.3 % of battery from 100 to 5% of the charge cycle. Instead it used 18.3% from 64 to 5% of the charge cycle because starting from 17th March my battery was at 64% at 12 am.
This is totally misleading, one would presume oh this is draining a lot of battery on my device. But the data isn't accurate at all. Also the system usage is not shown in the battery usage page thats ludicrous.
The Screen on time for my device is still the same it averages about 9 hours with this type of heavy usage.
Take a look at this screenshot, I played the game for the exact same time but here it only displays 8% of usage whereas now (in the above Screenshot) it displays 18.3 % of usage. 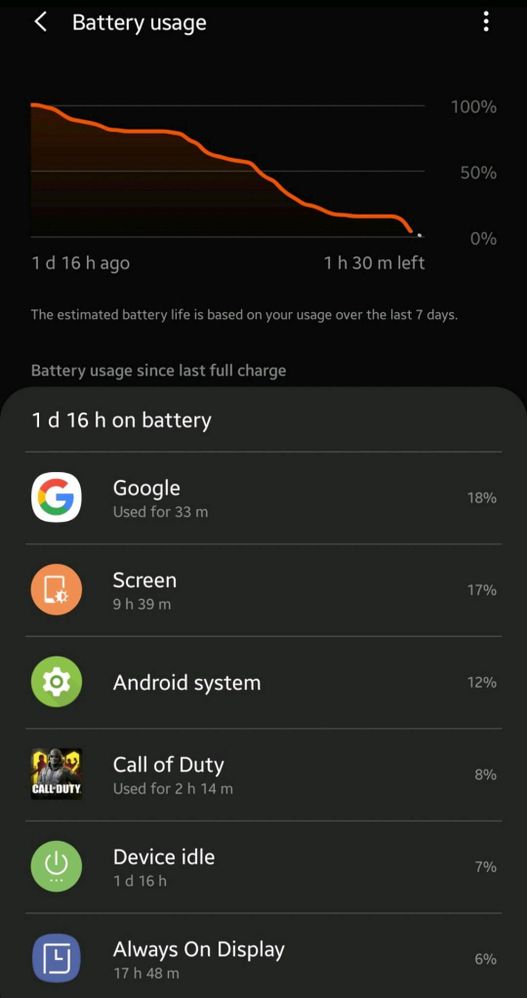 And that's not the only issue apparently the function to put apps to sleep no longer applies to Google App, it remains active in the background despite any use or functionality eating away your battery

I have specifically selected to put this app to sleep 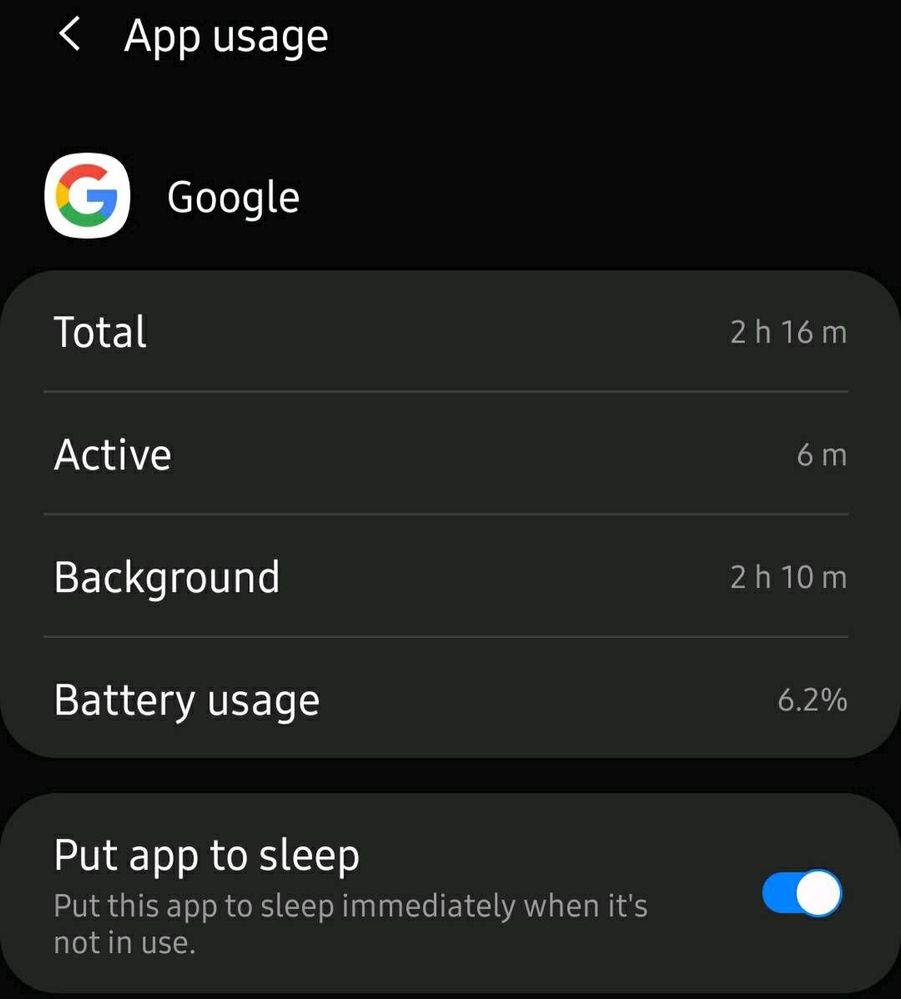 But it's still working in the background, I had to disable it.
These are some things that samsung should have never fiddled with.
They have mixed it with digital wellbeing the way it displays data about daily usage using vertical graphs.
Atleast provide the users with an option to check their battery usage since last full charge like before and not per day.
There should be an option along with "Last 7 days" to "Since last charge"
The new battery usage screen is horrible and completely useless, it's like a new way of hiding the battery life or the drain that is being caused by One UI Core or the system because there's no way of checking the system usage in this new user interface.
I hope Samsung fixes it as soon as possible.
12 Likes
Share
Comment

airjordan1
Active Level 4
animations are very laggy in my phone I also performed a factory data reset but even so the animations gets stuttery at times and also I'm experiencing lags in gaming as well before the update it worked like a charm but now it's very laggy playing pubg is a mess now idk what to do
2 Likes
Share
Reply
Reply
Loading...
Highlighted

Sciphile
Active Level 10
Yes it did lag horribly after the update but the reset solved it for me and games run smoothly on my M30s. I didn't try it with pubg but COD was working fine.
1 Like
Share
Reply
Reply
Loading...
Highlighted

airjordan1
Active Level 4
it's not because of reset or anything it'll still lag after some time because of battery optimizations settings go to setting to disable it for one ui home app and pubg app or any other to let it use cpu and not restrict it for battery saving I figured it out.
and now the ui is rocking so smoothly in my device it's all because of the new battery optimizing setting just disable them individually for apps and from the device care as well and it will do wonders to your experience.
1 Like
Share
Reply
Reply
Loading...
Highlighted