When Samsung first unveiled the Galaxy A02s in November the company said it will start selling the phone in February for a suggested retail price of 150 EUR. Well, it turns out that Samsung also wants to bring the phone to the USA, at least judging by a handful of documents that were recently published by the Wi-Fi Alliance and Bluetooth.

The unlocked Galaxy A02s, model number SM-A025U, was approved by the Wi-Fi Alliance today, but a couple of US-based carriers seemingly want to bring this new budget device to their networks as well. According to a couple of recent listings on the Bluetooth certification website for model numbers SM-A025A and SM-A025V, the Galaxy A02s is being readied for release via both AT&T and Verizon. In addition, a third model number (SM-A025AZ) indicates that the Galaxy A02s might also be picked up by Cricket.

Samsung will probably sell the unlocked Galaxy A02s in the USA for around $150, whereas network operators will likely offer it for free on contract. Either way, the phone has a 6.5-inch TFT HD+ Infinity-V display, an octa-core chipset, 3GB of RAM, 32GB of built-in storage, and a triple main camera setup.

The phone is powered by a 5,000mAh battery but unlike many budget phones released in 2020, the Galaxy A02s raises the bar with the inclusion of 15W fast charging. It’s a fantastic addition to what is essentially a budget-oriented smartphone with a focus on media consumption.

The WFA and Bluetooth certificates don’t reveal much about the phones aside from Wi-Fi a/b/g/n and Bluetooth 4.2 connectivity. Likewise, the phone’s exact release date in the USA remains unknown but we’ll keep you posted as soon as we find out more. 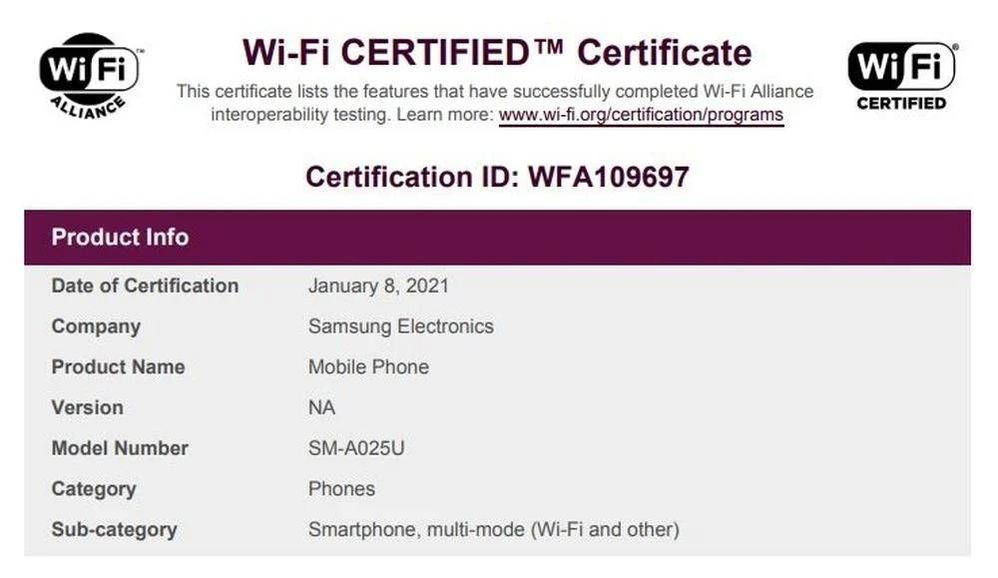