Others
Welcome to the club ❣️
2 Likes
Share
Reply 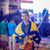