Samsung Pay
A21s, it does have knox
2 Likes
Share
Reply

Samsung Pay
Bro after this i am very well sure, m31s did not have pshycial knox, it has only software based knox, which is given through software update
1 Like
Share
Reply

Samsung Pay
Lol no, Knox doesn't work without hardware at all. A pendrive isn't detected until you plug it in, similarly, Knox version won't show up if Knox chip and TIMA fuse isn't plugged in. Knox version in settings can be added after root just by editing some files, but that's not what it is.
1 Like
Share
Reply 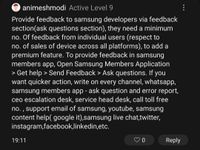 Samsung Pay
Bro i just want to bring a change. Samsung gives us very less features according to what our device supports (especially M & F series). Like carrier aggregation, processor supports but then also samsung did not enable it. As there is no other way, the only way is to ping samsung on every channel for this feedback. Our feedback started working, because clipboard and samsung pay mini is given. Now it will bring more improvements in future.
1 Like
Share
Reply

Samsung Pay
Clipboard and Samsung pay mini given for particular model not in all m series and it came because of Samsung wish not after listening to customer.. hangsung never listen to customer...if they then they must know how to solve issue by FOTA ..instead of that they release bogus software update for whole series and give typical issue inside
0 Likes
Share
Reply