KomalJain
Expert Level 5
Over the last decade, Korean electronics giant, Samsung has played a crucial rule in the development of the modern day smartphone. Not only is it the company that sells most number of handsets globally, it is also one of the biggest suppliers of smartphone components like display panels and memory modules which include RAM and ROM. 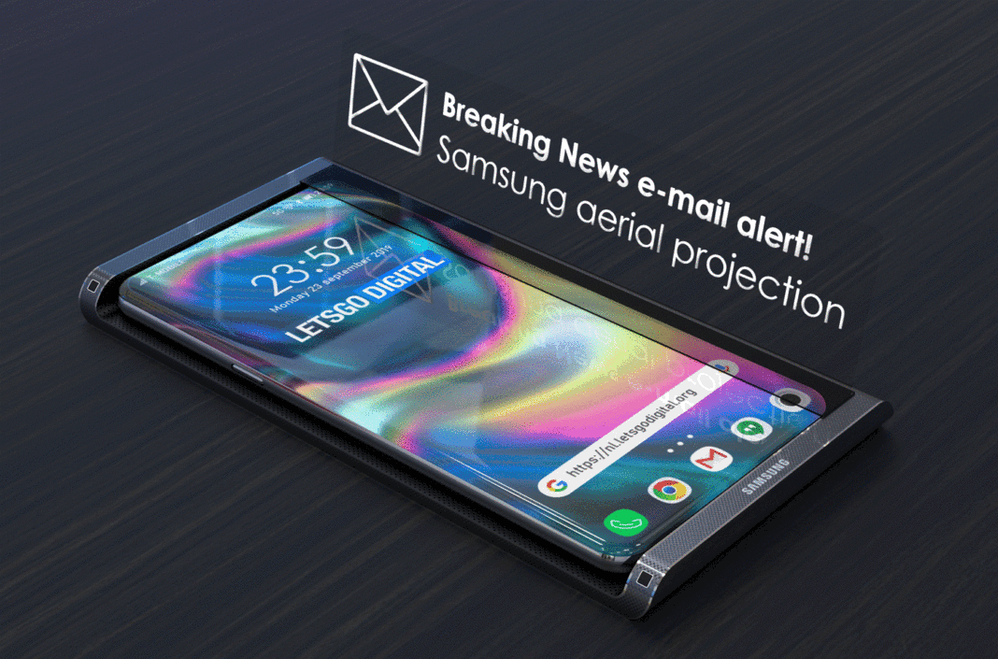 According to a freshly granted patent, Samsung is developing a unique smartphone dock that can project lifelike 3D holograms in the air. The patent for the said dock was filed with USPTO in the year 2018 and it was granted on September 19, 2019.
Going by the illustrations from the patent, Samsung envisions the docking solution to be interactive in nature, therefore, not only will it project 3D models, users will also be able to interact with the projections. The drawings show possible features like pause and play button to control music playback.
Another image from the patent seems to demostrate interaction with social media posts and incoming notifications. The GIF shared above could make its functioning a little bit easier to understand.

The patent exhibits that the technology is comprised of three main components which include an ‘edge display’, a ‘half mirror’ and a ‘retro reflective element’. As the name suggests, “edge display” is used to refer a smartphone with a tapered edge like the Samsung Galaxy S6 Edge.
While a ‘half mirror’ is nothing but a conventional mirror that reflects any light rays that fall on it. Lastly, a ‘retro reflective element’ is similar to safetly reflectors that is often seen on motor vehicles.
All three components are positioned on a certain angle to each other that can project the desired result. The users only need to place their phone in the special docking station which would simultaneously keep its battery topped up.
In addition to incorporating the technology in a stationery docking stations, Samsung also seems to envision this setup in smart speakers, flip covers and even heads up car display.
All in all, Samsung seems to have mastered the know-how to properly execute the technology. With that being said, it could take some time before consumer ready products are launched, given that Samsung feels their is a market for such visionary concepts.
11 Likes
Share
Comment