Akshitkamra
★
Samsung isn’t generally known for its shyness when it comes to technology shows. Yet the brand was being uncharacteristically coy at the recent CES about its flagship 2019 4K QLED TVs.

There was no mention of them at Samsung’s now traditional pre-CES TV unveiling event on the Sunday before the CES began. Nor could I find them anywhere on Samsung’s official CES stand. The only place select groups of journalists COULD find them, in fact, was in a special Innovation Room presentation in a meeting room away from the main CES floor.
Samsung’s apparent reticence to ‘go public’ yet with its 2019 QLED 4K sets could be down to a number of reasons. Maybe, for instance, it didn’t want the 4K TVs to get lost in all the brand’s Micro LED and 8K talk. Or maybe the new 4K QLEDs aren’t quite ready enough yet for Samsung to want to show them to the world at large.
Having attended one of Samsung’s Innovation Room QLED 4K sessions, though, I can safely say that had Samsung decided to show its new 4K QLED sets off more publicly, they may well have become one CES 2019’s most talked about products.
The single most headline grabbing talent of Samsung’s new high-end QLEDs is that they ‘solve’ LCD’s traditional viewing angle problems. Samsung is not the first brand to do this, of course. Sony beat Samsung to it with its Z9F Master Series LCD models. But here’s the cool bit: Samsung appears to have solved the viewing angle problem without causing the reduction in black levels you get with the Sony TVs.
In fact, the demonstrations we were given of the new 4K QLED sets (no model numbers were being discussed) revealed outstanding black levels for an LED TV. Better, in fact, than those of the already excellent 2018 Q9FN range. 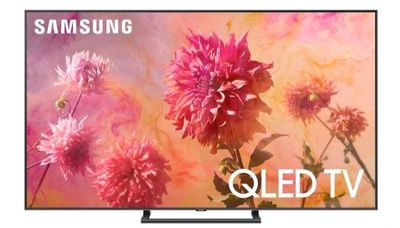 There was barely a hint of blooming around stand-out bright objects during our demos either – a result, it seems, of a new local dimming control system for the direct backlighting illumination that’s apparently baked into the TV’s chipset on a hardware level, rather than being ‘software only’.

It has to be remembered that Samsung showed off wide viewing angle QLED technology a couple of years back that ultimately didn’t make it to market. But while the 2019 4K QLEDs weren’t out there on the main show floor, the level of exposure they were being given was certainly higher than that received by those earlier, ultimately never released wide-angle QLED models.
While the ability to deliver wide viewing angles and simultaneously improve core black level performance was the most startling ‘hit’ of the new QLEDs in Samsung’s Innovation Room, there were other things to get excited about too. 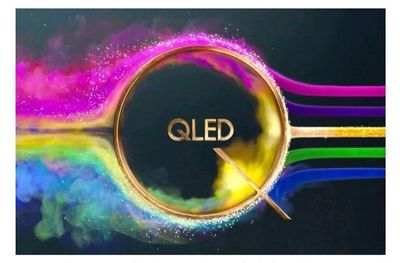 The high brightness levels QLED technology is renowned for didn’t seem to have been knocked by the new backlight and viewing angle prowess. In fact, where bright objects appear against dark backdrops, the bright objects looked noticeably more intense than they do even on the Q9FN – another benefit, presumably, of Samsung’s local dimming innovations.
Samsung was feeling confident enough in its new 4K QLEDs to run them against OLED competitors, and it has to be said that the degree to which they deliver on QLED’s natural advantages while now also pushing into territory usually ‘bossed’ by OLED technology was very striking indeed.
There’s more big news, too, regarding the upscaling processing of Samsung’s top 2019 4K QLED models. Samsung has, as I’d hoped it would, carried the fantastic upscaling system it developed for its 8K TVs down to its new 4K models. Predictably, this resulted during the CES demonstrations in radical reductions in MPEG compression and other noise when watching sub-4K sources; less jaggedness around curved and diagonal edges; as well as a generally more detailed, sharp and dense-looking picture.

Interestingly, it appears from Samsung’s presentations that the latest upscaling system has a component dedicated to addressing the bandwidth of streaming sources. Certainly the impact of the upscaling on streamed sources during our demos was particularly pronounced.

Also looking promising for the 2019 4K QLED TVs are new gaming features. The auto game switching and AMD Freesync VRR support introduced last year are now joined by an even faster input lag figure of 13.4ms (measured while we watched), and a new Dynamic Black EQ feature that lets you adjust the brightness of the darkest parts of a video game picture without it affecting the brightness or color tone of the rest of the picture. Ideal for, say, helping to spot enemies hiding in dark places without making the rest of the picture appear over-exposed. 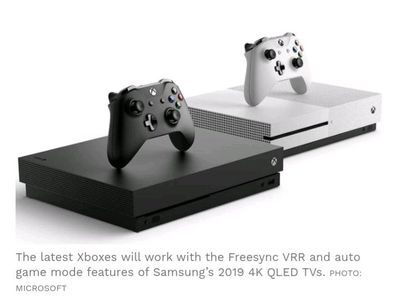 You can adjust the strength of the Dynamic Black EQ processing, and I really could see it giving you an advantage with certain games. Even though it’s not even cheating. Well, not really.

The seemingly outstanding, maybe even game-changing picture improvements apparently on the cards for Samsung’s 2019 4K QLED flagships are joined by a few smart platform improvements, too.

The biggest of these is the addition of support for two Apple features: AirPlay 2 and, uniquely within a built-in smart TV platform, the iTunes movies and TV store (more on this major development can be found in this separate story).

There are also improvements elsewhere in the smart system, such as improved navigation and customization options, and some intriguing features that might even allow you to buy your set on business expenses: built-in Office 365 support, Remote PC access, and Screen Sharing with your laptop, that lets you control the cursor on the TV screen using your keyboard and mouse.

Samsung suggested that it will be revealing more details on its new QLED 4K range in March – though experience suggests we might get a leak or two before that. In any case, keep an eye on my Forbes channel for more details on what have the potential to be some of 2019’s most exciting TVs.