SAMSUNG IS NOW THE TOP BRAND FOR PREMIUM SMARTPHONES IN INDIA

BADSHAH18
Active Level 9
couple weeks back we learned that Chinese phone maker Vivo overtook Samsung’s second place as the biggest seller of smartphones in India. According to Canalys firm, the brand did indeed sell over 6.7 million units and saw a rise in market share to up to 19.9% ​in the first quarter of this year. While Samsung dropped to 6.3 million units shipped and 18.9% market share.

‌Samsung is Now the Top Brand for Premium Smartphones in India

Well, apparently, it’s not just bad news for the Korean tech giant. According to a new research, this time from Counterpoint Research, Samsung led the premium market segment in India for the first time in a long time. Obviously, we’re still talking about Q1 of 2020. The so-called premium segment includes all smartphone priced above INR 30,000, which is around $400. This means that yes, it includes high-end phones, but at the same time we find non-flagship devices such as Samsung’s “Lite” alternatives.

As a matter of fact, these “Lite” options are what pushed Samsung into the lead, according to the market research firm. We’re specifically talking about Samsung Galaxy 10 Lite and the Galaxy Note 10 Lite. That said, the more “affordable” Samsung Galaxy S20 also helped with the accomplishment; although the brand offered some incentives and cashback to ease the sales.
Samsung Galaxy S10 Lite & Note 10 Lite

Either way, Samsung managed to attain a whopping 34% of the market share in the premium smartphone shipments for the first quarter. Which is very good news for the brand that recently decided to allow thousands of offline retailers to become part of the online ecosystem and thus reach out to a larger base of consumers; with over 20,000 sellers that have already signed up.
Finally, as we can see in the graph above, Samsung bested Apple by around a point. Meanwhile OnePlus fell by an additional 8% after dominating in Q2 of 2019. 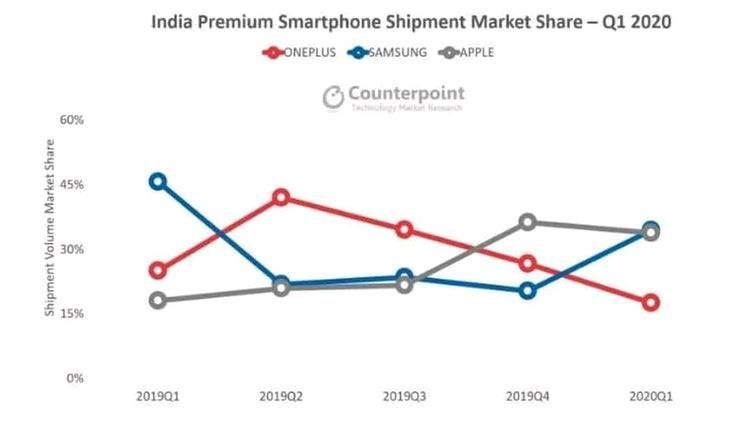