it is closer than we thought

For the past 5 months, we’ve been watching as Google slowly brought support for their Fuchsia OS to the Android Emulator, which would make the OS accessible to developers who don’t have Pixelbooks. A pair of indie developers have managed to piece together some of Google’s work-in-progress efforts to demonstrate Fuchsia running directly in the Android Emulator.

Fellow Fuchsia enthusiasts Greg Willard and Horus125 took to Willard’s personal blog to share their work. The blog post primarily explains the various steps the duo took to get Fuchsia up and running in the Android Emulator. Of particular note, four proposed code changes from the Fuchsia Gerrit were needed, dating back to February. Each of these code changes connects an additional piece of the puzzle, like adding a command flag that signals the Fuchsia tools to actually use the Android Emulator. As these changes have not been merged (or accepted) into Fuchsia code yet, that means they were not part of the Fuchsia “release candidate” we uncovered last month. This casts some serious doubt that we’ll be seeing a public release of Fuchsia for the Android Emulator at Google I/O or any time in the near future. The two developers also shared screenshots of the results of their work. In them, we get our first glimpse at what appears to be the Ermine shell, a replacement for Fuchsia’s original Armadillo UI.

Clearly, this new UI is far less flashy, which makes sense considering it’s designed for developers, not the average user. Willard notes that there isn’t much else to show off about Fuchsia in its current state. While it’s possible to follow the duo’s steps and try out Fuchsia for yourself, the guide assumes you already have a decent familiarity with Git, and the other various tools used to manage the Fuchsia source code. Additionally, one of Fuchsia’s requirements for graphics, Vulkan, currently only works in the Android Emulator from Linux, not Mac OS or Windows. 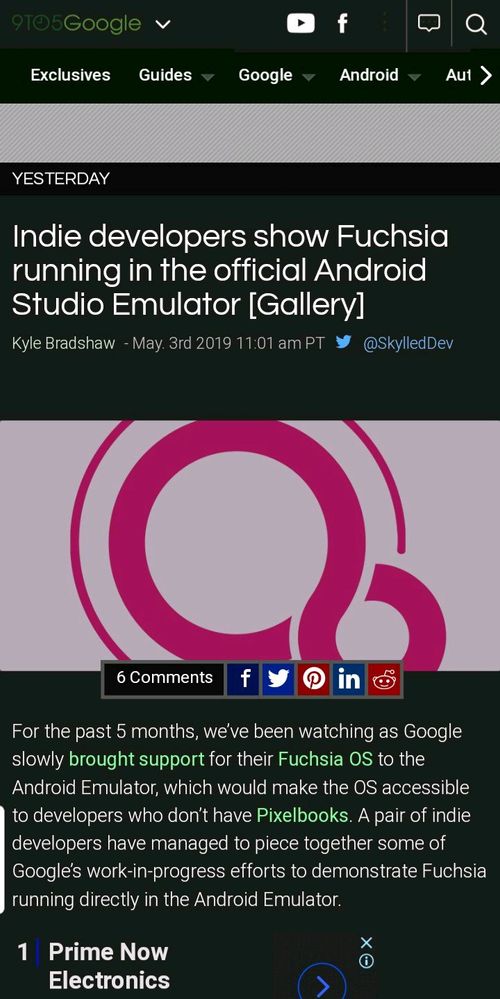 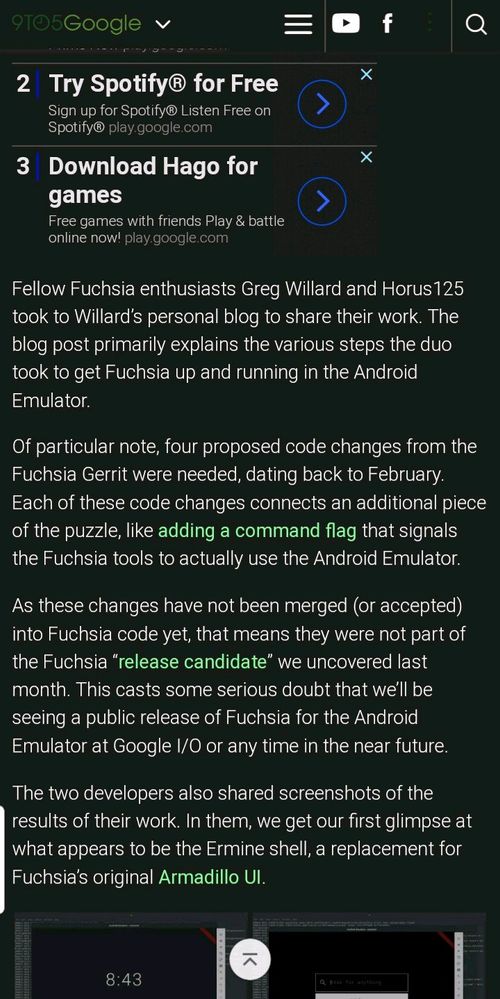 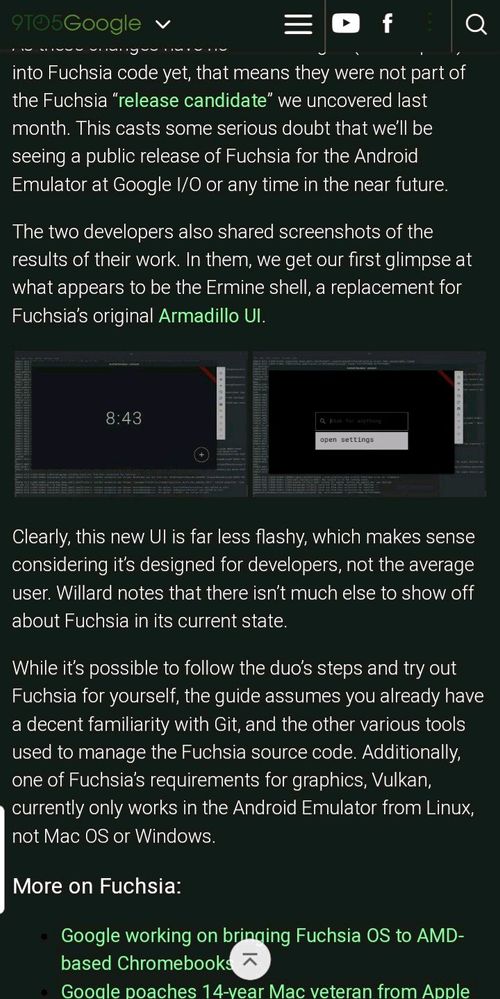 darkvarder
Expert Level 5
Fuchsia is still a work in progress which has been available on Github for a while now but we haven't really seen a  demonstration of it in action.  A Texan enthusiast has been working on creating one and you can take a peek at it in this video over at The Register.  The tiny OS is design to run on almost anything, from smart light bulbs to phone and even full sized computers.  It is based on BSD with additional resources developed at MIT and will be backwards compatible with current Android libraries.

"When Fuchsia broke cover last August, we noted the project's ambition. The presence of a compositor indicated it was capable of running on more than lightbulbs and routers, although the tiny new Magenta kernel also allows it go there too."

Hàŕśhìtsaxèñà
Active Level 7
I knew you are very honest and intelligent be on your words
0 Likes
Share
Reply
Reply
Loading...
Highlighted

darkvarder
Expert Level 5
hmm let me guess Samsung will have no authority upon this os as Google will not let Samsung or other company to modifie the os Google will self control the os centrally no matter the device is mid or premium or what ever it is . all will have same feature same ability of update and it is like iOS which Google will provide the updates for ever until the user want to switch the phone . this os is a eco system to counter the iOS eco system . Google will take away the freedom of modifying the os from manufactures. the manufacturers are only allowed to provide hardware.

this is will not support the bio metric unlocks rather. then it will have two factor verification each time you login how ever you have the option to stay logged in
0 Likes
Share
Reply
Reply
Loading...
Highlighted