MaanSinghVijay
Active Level 2
Dear Samsung,
I have always been a fan of Samsung devices. I recently had a note 9 which I loved but as I held onto it for around 9 months, it started dying so fast not even going through 80 percent of the day. I jumped to one olus 7t pro thus. Although everything was great, the high refresh rate screen, smoother user interface and so on, one thing I felt was a degradation was the camera quality and that has always been a priority for me. I could not stay on that so I finally came back to Samsung again with Samsung Galaxy S10 plus. I immediately loved it. The UI has never been faster, it didn't make me miss that 90 Hz display and overall I was feeling good about the canera again which was even better than note 9 this time as S10 series fixed one major problem with Samsung camera and that was overexposure. I am very happy with the device.
One thing that is still plaguing this great device is the battery backup. There are unexpected battwry drains overnight even if I kill all the background apps. I barely get 4 hours of screen on time with one charge which is not acceptable with this phone as I saw people bragging about battery life on their s10 phones but then I realized that all of these YouTube enthusiasts had a snapdragon version and all the people who were complaining were the ones having exynos devices. I know exynos is more power hungry SoC but bearing that in mind, it should be optimized to give round about similer battery life as does the snapdragon opponent because if my battery dies quicker on a single charge then I would end up charging more which in turn decrease the overall life cycle of the battery.
In their recent event of note 20, Samsung said they do listen to user feedback so the only hope here is if somehow this issues is dealt with by RnD and they dig deeper as to why it happens and release a software patch. I know it is a long shot but chances of Samsung listening are still higher than Apple.
In the below ss, from 12 am to 12 pm, for more than one hour I was just reading a pdf on the phone and rest it was in stand by and it lost almost half the juice during this time. 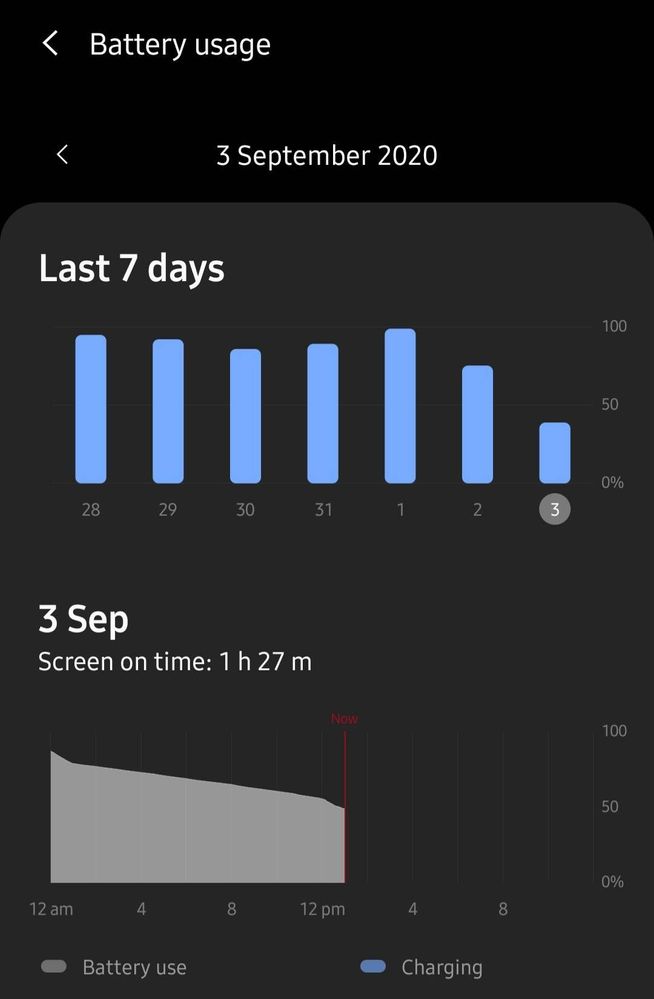 Ehsank
Expert Level 5
so for your information only even you kill all background activity its run on background.
i will give you some settings to save more battery life
and when go to option no. 2.
then you can easily understand that even you disable wifi or bluetooth its regularly run on background

3. Google >click on 3dot>usage and diagnostics >off this option.

4. Long press on each app specially 3rd party(LIKE FACEBOOK, INSTA,YOUTUBE) and rarely used and ON "GOOGLE APP" as well then click on>app info> then go to these 3 options below on by one

B. Battery >allow background activity >off

And then click on "app power management >
And enable these 2 options.
A. Adaptive battery
B. Put Unused Apps to Sleep.

6. Go to settings >apps>search "weather" >click on settings icon right side > change "auto refresh" settings as per your requirements and disable some unnecessary reminder.

Ehsank
Expert Level 5
In response to Ehsank
so just do these settings and observe for next 2-3 days or this night
i m sure you will get noticeable difference
1 Like
Share
Reply
Reply
Loading...
Highlighted

Ehsank
Expert Level 5
In response to Ehsank
and if my given settings/ comments work for you then you can
ACCEPT AS SOLUTION BY CLICKING ON 3DOT AT MY COMMENTS
0 Likes
Share
Reply
Reply
Loading...
Highlighted

Ehsank
Expert Level 5
In response to Ehsank
just read this which i marked, on attached image. which you will find in my settings no. 2
Screenshot_20200903-135717_Settings_60459.jpg ‏96 KB
1 Like
Share
Reply
Reply
Loading...
Highlighted

MaanSinghVijay
Active Level 2
Thanks a lot Ehsank for taking the time to reply. I appreciate it. I had already applied 1, 2,4,5,7.
Will apply 3 and 6 as well and will see but in general there is around 1 hour of screen on time difference between the two variants which bothers me that people are paying the same amount yet exynos has inferior battery life. My previous snapdragon 855 plus had much better battery life with only 4000 mah battery capacity.
0 Likes
Share
Reply
Reply
Loading...
Highlighted

LivingTribunal
Active Level 4
Exynos is **bleep***"t... period. For whatever it's worth, do all of the above and get extra 30-45mn of SOT. Your standby would only improve by about 10-15%. It's nothing but Exynos. I also love the phone but tear my hair apart when it comes to standby. I have tested Snapdragon variants and they are really good on standby.
0 Likes
Share
Reply
Reply
Loading...
Highlighted

We would request you to kindly send us the screenshot, video and error log file with in 15 minutes of issue occurrence through error report section from Samsung Member Application:-
Samsung member application > Click on get help > Send feedback > Error report, so that we can help you out with this.

MaanSinghVijay
Active Level 2
In response to cs-member13
Hi, As this is battery drain issue that I am complaining about so it happens over time when phone is idle so not really able to make a video of that or generate log for that. This can only be shown via battery usage log which I am attaching here. If you see in screenshot, phone was idle for so many hours still I ended up losing so much battery. This is just not good. Even in case of no usage, battery is just depleting at the same rate as it is depleting normally with usage and even in that it is fast. This is not good battery optimization by Samsung.
Screenshot_20200906-082523_Device%20care_3225.jpg ‏78 KB
0 Likes
Share
Reply
Reply
Loading...
Highlighted