Samsung pushes another Android 10 beta for the Galaxy S10 series 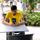 ShiveshSehgal
★
Samsung has begun seeding its newest Android 10 beta for the Galaxy S10 series. This is the fourth since the One UI 2.0 beta program began.

The German version, in particular, comes with the G97**XXU3ZSK9 build number and weighs in at just over 344 MB. It brings a slew of bug fixes that tackle screen flickering problems, status bar issues, keyboard and other UI problems.

Samsung has already closed its One UI 2.0 beta program in South Korea, which signals that it is close to releasing the stable build soon. That all depends on the number of bugs left to fix after the latest beta release.