Unconfirmed reports claim that the Exynos 1000 will be faster than the Snapdragon 875, but we can’t just assume that this will be the chipset used in the next Galaxy S flagships. Those early reports were based on Geekbench results that were pulled from the database before we could confirm they are legitimate 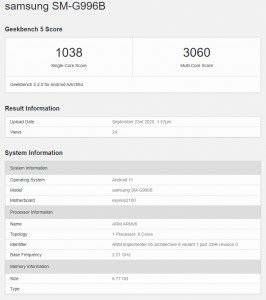 The phone should have 8 GB of RAM as the 6.77 GB figure likely omits the memory reserved for the GPU. This matches the RAM capacity of the current Galaxy S20+ with 4G connectivity (the 5G models have 12 GB).

The 2.21 GHz clock speed should be for the small CPU cluster – for some reason Geekbench always reports the small cluster. For comparison, the four A55 cores in the Exynos 990 run at 2.0 GHz, so we can expect a small overclock for all cores. What those cores may be is unclear (the Exynos 1000 is said to feature the new Cortex-X1 core).

Well, now there is a Geekbench result from what should be the Samsung Galaxy S21+ and the scores are tangibly lower. Notice that the score page for the SM-G996B (likely the euro version of the S21+) lists the chipset as “Exynos 2100”, which appears to be an entirely different chip.