satoshi
Expert Level 1
Although the availability dates for the Samsung Galaxy S10e, Samsung Galaxy S10, or Samsung Galaxy S10+ aren’t included in this page, Samsung Philippines’ pre-order page reveals the availability date of the rumored Limited Edition Samsung Galaxy S10+—March 15, 2019. It’s possible the Limited Edition model will launch earlier or later in other markets, but Samsung tends to launch their smartphones globally so we don’t expect the date to differ too much between regions. This model is said to have a ceramic back, 1TB of internal storage, and 12GB of RAM. Samsung recently announced they’re making 1TB UFS chips for mobile devices, so we expect to see this new chip in the Limited Edition model. 12GB of RAM sounds absurd for a mobile device, but it could come in handy if you plan on running Linux on DeX. 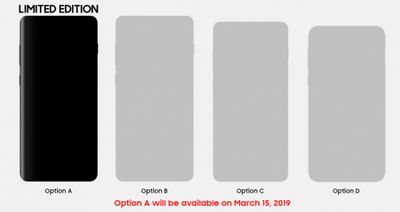 If you look closely at the renders, you can actually see that they’re outlines of the devices. These match the leaked renders of each device perfectly. Option D is the Galaxy S10e as you can see the indent for the side-mounted fingerprint scanner. Option C is the Galaxy S10 with the power button that’s mounted pretty high up on the side. Options B and A are both Galaxy S10+ models, though the Limited Edition has more bells and whistles. All 4 of these devices will pack either the Qualcomm Snapdragon 855 or Exynos 9820, reverse wireless charging support, and Android Pie-based One UI. While the availability dates for the non-Limited Edition models aren’t confirmed, you can expect these devices to launch in early March. Current rumors point to availability on Friday, March 8th, but all 4 devices could very well launch on March 15th, 2019. As for pricing, the Samsung Philippines site doesn’t show any retail prices but the rumored prices for the devices are $750 USD for the Galaxy S10e, $900 for the Galaxy S10, $1,000 for the Galaxy S10+, and $1,500 for the Limited Edition Galaxy S10+. The 5G model is rumored to come later. All of this information will be officially announced at Samsung Unpacked on February 20th, 2019.
0 Likes
Share
Comment