Samsung was supposed to release the Android 10 beta for the Galaxy S10 today. It emerged earlier today that the beta was going to be delayed. Samsung later confirmed this to us as well. It now expects to release the beta by mid-October.

It could be at least a week before it starts rolling out the beta firmware. However, it appears that at least one device got the beta firmware, so we now have some details about the key features that Samsung is introducing with this major firmware update.

One UI 2.0 features and improvements

The device in question belongs to PhoneArena. It’s a Galaxy S10+ which is now on firmware version G975FXXU3ZSJ6 which brings Android 10 with One UI 2.0 and the October 2019 security patch. 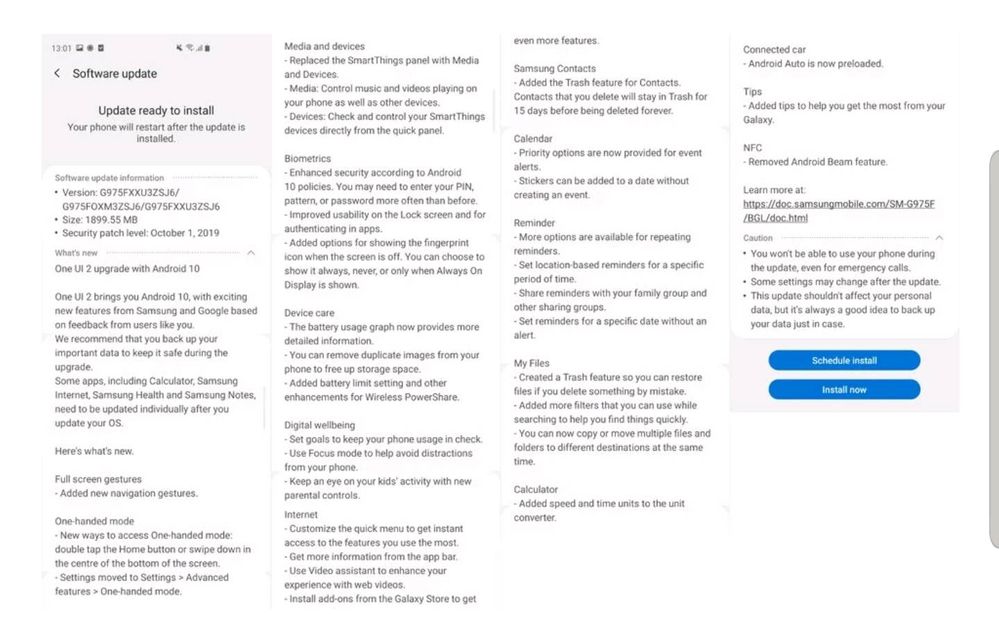 One UI itself was a very significant redesign of Samsung’s user interface when it was introduced last year. It was evident from the beginning that this wouldn’t be the case for One UI 2.0. So there won’t be any major differences, visual at least, when trying out One UI 2.0 for the first time.

As One UI 2.0 is based on Android 10, it brings Google’s new gestures for navigation, which allow you to swipe from the sides and the bottom. The back gesture sensitivity option will help those who use a bulky case that makes it difficult for them to do the Back gesture at the edge of the screen.

Device Care has received an upgrade as well with One UI 2.0. Some of the sections have been redesigned to show the information in a cleaner manner. Accessing the One-handed mode now requires you to swipe down from the bottom of the screen.

Some subtle changes have been made to the user interface as well. The native apps have been updated with Contacts getting a Trash option, much like Gallery did with One UI 1.0, to store deleted contacts for up to 15 days before they’re deleted for good.

We expect to hear more about One UI 2.0 in the coming days. Samsung will hopefully be rolling out the Galaxy S10 Android 10 beta sooner rather than later. Like what you see so far?

WinjeetSandhu
Active Level 3
There is no inbuilt screen recording feature and tones of mlre are missing which google has in it's version of Android 10. Google's phones are not powerful but has precise Android any phone can ever have.
0 Likes
Share
Reply
Reply
Loading...
Highlighted