Galaxy S
Stadia is Google’s game streaming service that makes it possible to play console games on a variety of devices including smartphones. Since all of the heavy lifting is done in the cloud, console games can easily be played on mobile devices.Several Samsung devices have been fully compatible with Stadia since last year. Google has now expanded the list with 11 more Samsung devices. They include the Galaxy S21 and Galaxy Note 20 phones.

It’s technically possible to steam Stadia games on any Android device. However, that’s done in an experimental capacity. Google maintains a list of devices that it supports officially for the game streaming service.They include devices from Samsung and other manufacturers. These devices deliver the best possible Stadia experience without requiring any tweaks from the user. Since the games are being streamed over the internet, a great internet connection is obviously of vital importance.

It’s interesting to note that Samsung’s latest foldables are still missing from the list. One could argue that the Galaxy Z Fold 3 is the perfect candidate for official Stadia support. There’s no saying when it will get it, though. 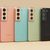 Galaxy S
Yes, finally my tab A7 will get stadia. I expected DeX but they did not give DeX it is okay they will give stadia.
0 Likes
Share
Reply