Most of the M30S users are facing severe network reception issue and we have seen a lot of members saying the same thing in the forum, even in Amazon.in customer reviews. So I reached out to Samsung after sailes head and Samsung CEO via email. Here I'm attaching their mail response. 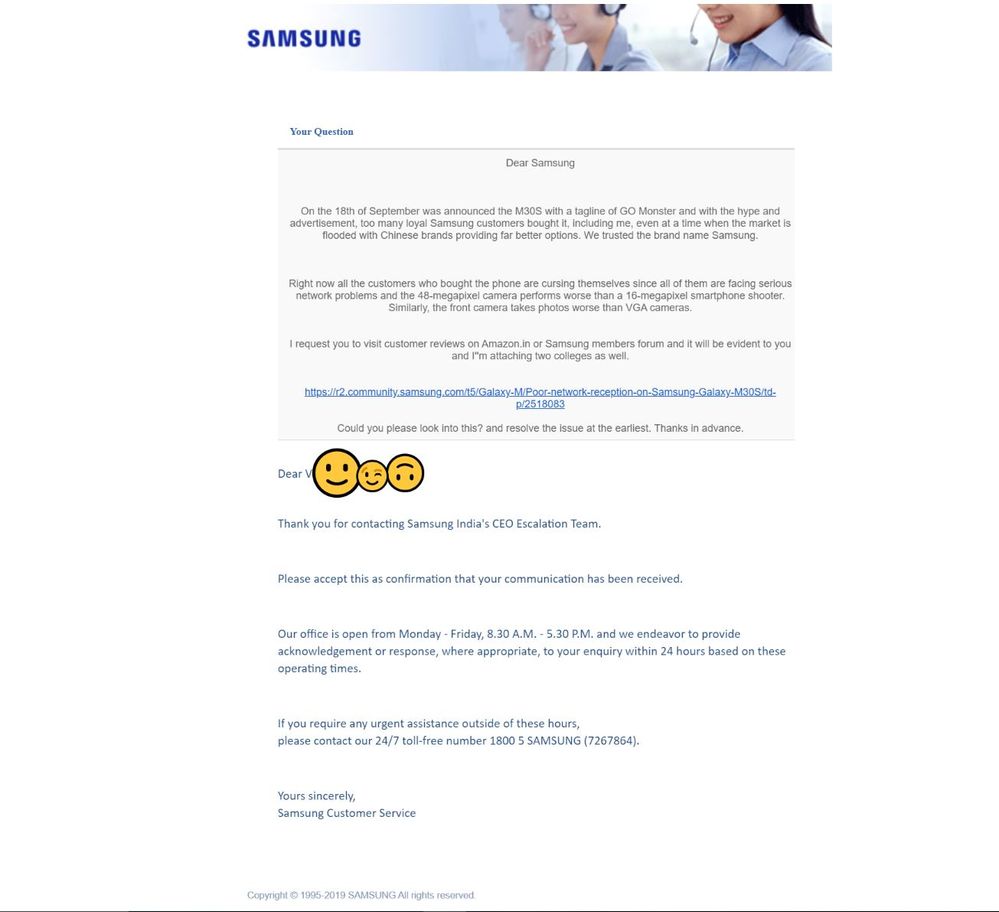 Response from head of After-sales Samsung

After-sales responded with a few steps to overcome the network issue. Since i tried it all and failed miserably i didn't give it that much importance. (Please give it a try and if it worked let me know in the comments below )

When it's come to the Samsung CEO office i got a call from them on the same day. I had a conversation with Mr. Gaurav Sharama(Senior Executive, Customers experience Samsung India). I explained to him what we are facing with corroborating evidence and insisted him to go through our forums to get a clear idea. He responded to me, they will escalate the issue to the higher authority and if necessary propound the software team to push an OTA update. Then he connected the phone to the nearest Samsung authorized service center and i talked to the technical expert over there through the phone. I was very skeptical about going to the service center at first since my phone is up to date; there is no point in update the software again at the service center. The technical expert is very confident and asked to bring the phone to ACC. He suggested me to update software and still the issue is not rectified they will proceed with hardware diagnosis. I went there and did the update. Later on, while checking i get to know that the software version is the same as what we received on the 6th of this month. As i dig deeper i found out that they changed the network operator's selection from auto to manual, other than that i didn't find anything special about the software. Anyway, i found significant improvement in network reception and the battery life after this. It is not the best fix but seems like it's better than worse. My theory is that; poor reception is the prime suspect for the mediocre battery life performance in M30s, considering it's vaping 6000 Mah battery, as phone struggle to maintain a stable network.

Both Screenshots shown below are taken at the same , place which is at my balcony.

Since i contacted Samsung India via email, i didn't post this issue on Twitter or FB. Twitter has a character limit of 280. I already contextualized the matter and any of our beloved members have to summon the energy to edit and post it social media. Let them know it's not an isolated incident and we have to force them to make a fast remedy.

Vishanavi
Active Level 8
Good for you. Anyway, go through this old post you will get to know what is happening.

arijitkoner98
Active Level 9
i didn't face network problem in my phone...though camera detail and low light performance is not very good. however, hope those who faced the problem, it gets resolved at the earliest.
1 Like
Share
Reply
Reply
Loading...
Highlighted

arijitkoner98
Active Level 9
NOT i said! normal daylight shots are fine but not detailing in 48mp...selfies are worse...i can't say it's the worst...it is average
1 Like
Share
Reply
Reply
Loading...
Highlighted