It was revealed last week that Samsung is working on two entry-level smartphones, the Galaxy A02 and the Galaxy M02. Their Bluetooth certifications gave us a hint yesterday that they could be the same phone with different marketing names. Now, the specifications of the Galaxy M02 have been revealed.

According to a Geekbench listing, the SM-M025F (Galaxy M02) runs Android 10 out of the box, which means it should debut with One UI 2. The smartphone uses a Qualcomm processor, and it is being rumored that it is the Snapdragon 450 chipset. It also features 3GB of RAM. We expect the phone to come with at least 32GB of storage and a dedicated microSD card slot for storage space expansion. The phone has also received the necessary certification from the Wi-Fi Alliance. It seems to feature single-band Wi-Fi b/g/n and Bluetooth 4.2 wireless connectivity.

Not much else is known about the Galaxy M02, but we expect it to come bearing better specifications than the Galaxy M01s, which was launched a few months ago. It featured a 6.2-inch LCD screen, Snapdragon 439 SoC, 3GB RAM, 32GB storage, 13MP+2MP dual-camera, 8MP selfie camera, and a 4,000mAh battery 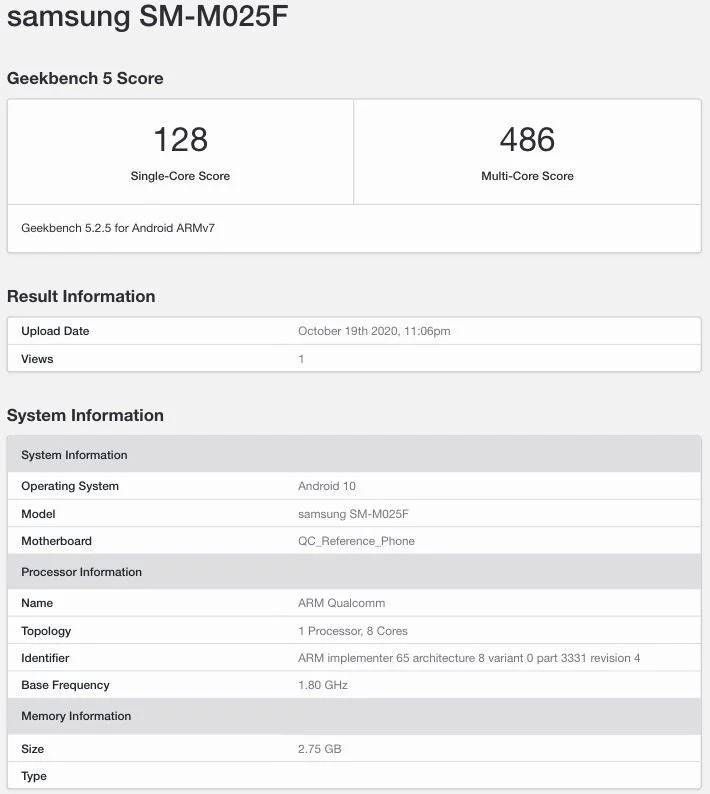