A21s and A31 devices is most sale in devices in world January 2021.....So please gives a Monthly Security pathes to this devices......please moving 2 models Quarterly Security patches to Monthly security Patches.... 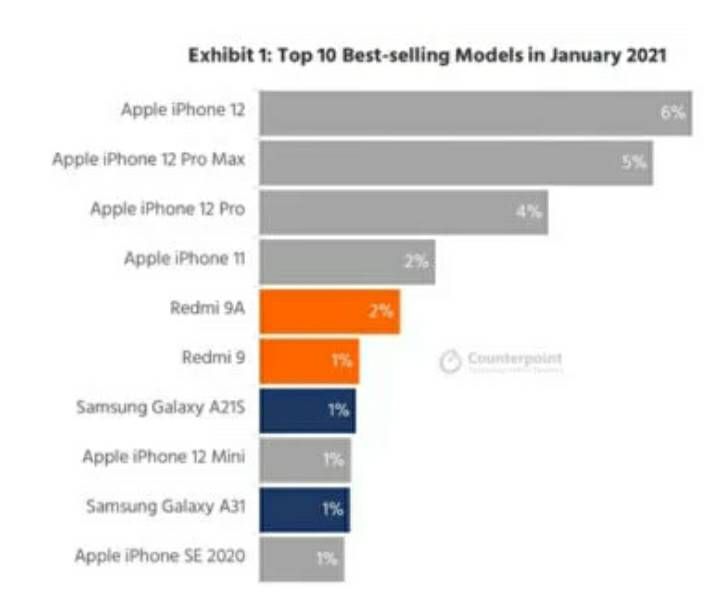 This chart shows Samsung is in serious trouble

After disappointing sales of the Galaxy S20 series last year, Samsung bounced back with the Galaxy S21. It was reported that Galaxy S21 outsold its predecessor in the US, and sales have been 30% higher in South Korea. Its Q1 2021 earnings also point towards better sales of the Galaxy S21 series. However, the company still seems to have a huge problem in the smartphone segment, especially since the launch of the iPhone 12 series.

According to a new report from market research firm Counterpoint Research, there were only two Galaxy devices in the list of top 10 best-selling smartphones in the world for January 2021. The Galaxy A21s was at the seventh position, while the Galaxy A31 was at the ninth position. Apple grabbed six positions in the list, including the top four positions. The iPhone 12 was the world’s best-selling smartphone, while the iPhone 12 Pro Max, iPhone 12 Pro, iPhone 11, iPhone 12 mini, and the iPhone SE 2020 ranked second, third, fourth, eighth, and tenth, respectively.

Apple and Xiaomi are eating into Samsung’s market share

In the US, nine out of ten teens reportedly own an iPhone, and 90% of those users prefer upgrading to an iPhone. Hence, Samsung is going out of its way and trying to turn some iPhone users towards Galaxy smartphones. The company recently released a web app called iTest that shows iPhone users a taste of the Galaxy experience. The website allows users to experience One UI, Samsung’s stock apps, UI customization, and more.

A51 was best selling device for 2020, 12 months and is getting quarterly. A31 best selling only for January to get monthly. That's 🤪🤪

A21s and A31 devices is most sale in devices in world January 2021.....So please gives a Monthly Security pathes to this devices......please moving 2 models Quarterly Security patches to Monthly security Patches....

What is this? Nothing? You want monthly updates for A21s and A31, the news from Sammobile I have read many times 🤦‍♂️