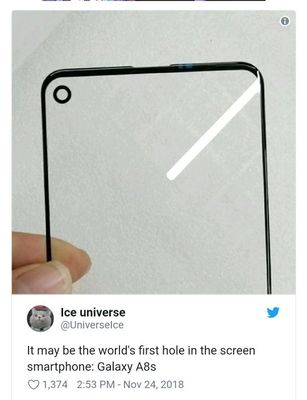 The Galaxy A8s has been in the news for a few weeks now because it is tipped as the first phone to launch with Samsung's new Infinity-O display. This is one of the many displays Samsung has been working on and it is unique because it will bring a cutout for a selfie camera, which is something we haven't seen before. Last week, some renders of the Galaxy A8s surfaced that showed us what the device with the new Infinity-O display will look like. Now, we have a live image of the alleged screen protector that gives us an up-close look at the cutout.
The latest leak comes from tipster Ice Universe on Twitter who posted an image of the screen protector of the Galaxy A8s. It shows a round cutout on the top left corner, which is where the selfie camera will be placed under the panel. The idea of the Infinity-O display is to remove the need for a notch so the top bezel is almost non-existent. Samsung is working on separate Infinity-U and Infinity-V displays for the notch. View image on Twitter View image on Twitter Ice universe @UniverseIce It may be the world's first hole in the screen smartphone: Galaxy A8s 1,374 2:53 PM - Nov 24, 2018 198 people are talking about this Twitter Ads info and privacy The cutout means the display will have to work around the selfie camera, so we are yet to see if this is less distracting or less intrusive than having a notch. Unlike the notch that can be hidden via software, the cutout cannot be hidden.
The Galaxy A8s is expected to be the first phone to sport the Infinity-O display when it comes out in January, but there are rumours that the Galaxy S10 will also get this display panel. The latest leak once again tells us nothing more about the upcoming Galaxy A8s. As per paast reports, the phone will be powered by a Snapdragon 710 chipset coupled with 6GB of RAM. It may also ship with Android 9 Pie with the new One UI on top that will be optimised for the cutout display. 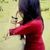 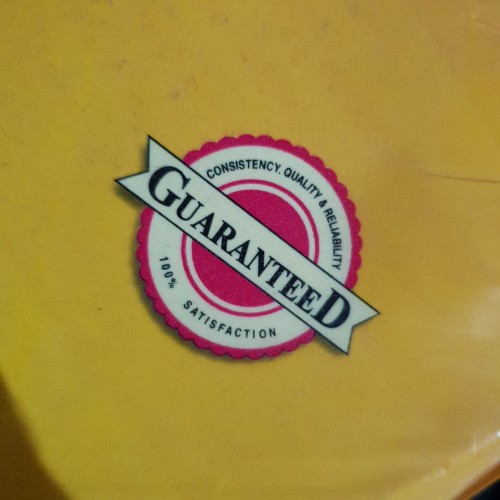 Galaxy A
Hi guys,
Please support and share this issue if you find it a genuine issue with all samsung users. Your support can make this implemented by samsung developers faster. Samsung admin has also responded now by the support from all of you. More support needed. Please help to make this happen. It is for all of us. Thank you....
https://community.samsungmembers.com/en_IN?projectId=0&meta=#/post?postId=405973
0 Likes
Share
Reply

Galaxy A
Thank you for sharing this information with Samsung. Keep posting!!
Be sure to hit ♡ when you find an answer that works for you. For Further assistance, you can get in touch with us via Live Chat option by following- http://livechat.support.samsung.com/Customer_new/IN. You can also connect us via Samsung Members web community by following mentioned url-https://community.samsungmembers.com/en_IN#/
1 Like
Share
Reply