Samsung Galaxy A80 spotted on Geekbench

Galaxy A
Samsung has launched a bunch of Galaxy A series phones so far and is gearing up to add new ones to the lineup at the Galaxy Event . It might also include the widely rumoured Galaxy A80 which now surfaced on the Geekbench benchmark, revealing that it will be powered by the Qualcomm Snapdragon 6150 processor, pack 8GB of RAM, and run on One UI based on Android 9.0 Pie. Samsung Galaxy A80 The Qualcomm Snapdragon 6150 could be the successor of the Snapdragon 675. Unfortunately, nothing much is known about the Galaxy A80 at this point, but with the launch just a day away, we should know more details soon. Samsung is also widely expected to launch the Galaxy A90, which has been in the news for quite some time now. 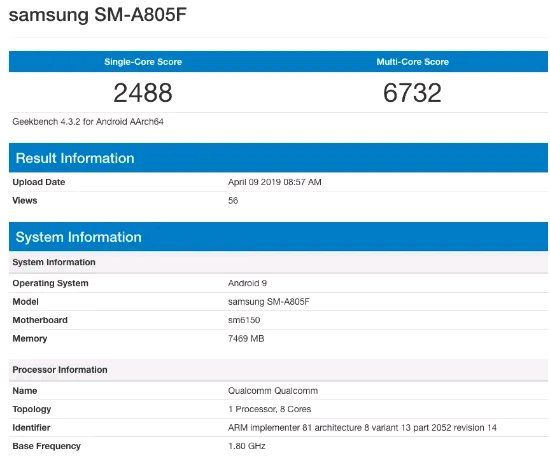 The phone is likely to be powered by the Qualcomm’s unannounced mid-range Snapdragon 7150 chipset ticking at its core, and pack a 6.7-inch full-HD+ OLED display with 1,080 x 2,400 pixels resolution. As for the optics, it will have triple rear cameras consisting of a 48-megapixel main sensor with f/2.0 aperture, 8-megapixel (f/2.4) secondary sensor, and a third Time-of-Flight (TOF) lens with f/1.2 for depth effect. The handset will be fuelled by a 3,700mAh battery with 25W PD fast-charging. Furthermore, the Galaxy A90 will come with a rotating pop-up camera to accommodate a notch less display. It will use sound-on-display technology to have the screen panel function as the speaker and the earpiece. There are also rumours that the phone that was previously leaked as the Galaxy A90 will now be marketed as Galaxy A80. However, with the difference in processors, things remain unclear. However, with just one day for the launch event, we won’t have to wait too long for the mystery to unravel.
0 Likes
Share
Comment
0 Comments