BADSHAH18
Active Level 9
Samsung is currently working on yet another A-series smartphone dubbed Galaxy A21s. Earlier this month, the device appeared on the GeekBench revealing some key specs along the way. Well, it has now made its way to the FCC listing as well. As you might have guessed, we now have more information surrounding the smartphone.
Samsung Galaxy A21s Surfaces on FCC Listing, Details Revealed 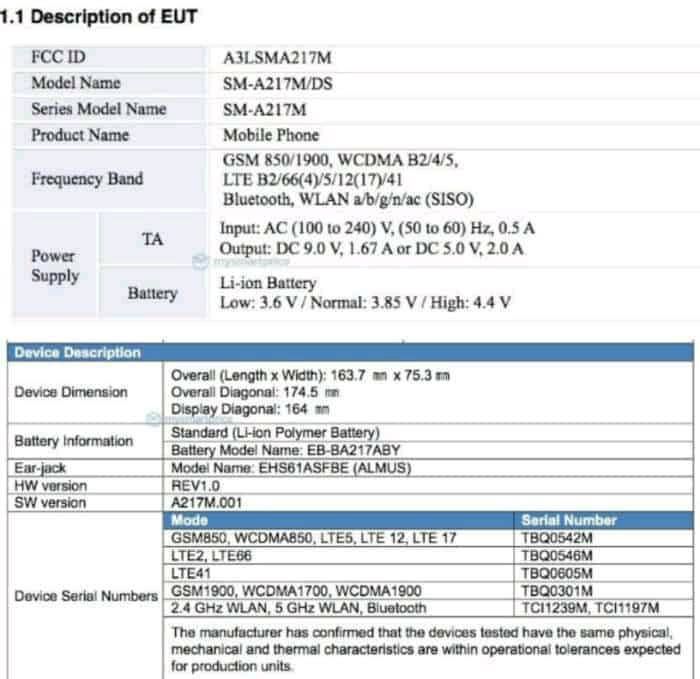 The upcoming Galaxy A21s spotted on the FCC listing with the model number SM-A217M/DS. As per the listing, the phone will come with the 6.4-inch display panel. The screen size is quite similar to that of the A21 smartphone. Furthermore, the device will come with 15W fast charging support. We also have some information on the network bands.
It seems like the phone will support GSM1900, LTE2, WCDMA1900, WCDMA1700 LTE66, LTE41, and GSM850 network bands. The phone measures 163.7mm x 75.3mm and comes with dual-band WiFi connectivity.

To recall, Samsung Galaxy A21s will come with a punch-hole design housing the front selfie camera. Under the hood, the phone will run on Exynos 850 SoC which is unannounced at the moment. The chipset will be coupled with 3GB RAM and 32GB internal memory. The onboard memory will expand up to 512GB via microSD card.

In terms of optics, we’re looking at quad rear cameras featuring 16MP primary sensor, an 8MP ultrawide lens, a 2MP macro sensor and a 2MP depth lens. For selfies and video calling, there is a 13MP front snapper inside the cutout. All of these are backed by a 4,000mAh battery with 15W fast charging support. Lastly, the device will run on the latest Android 10 OS with One UI 2.0 skin on top.

At the time of writing this, there is no solid information on the launch and pricing of the smartphone. The FCC listing suggests that the device is inching close to the official launch. With that said, we should be hearing more about the phone in the coming weeks.
3 Likes
Share
Comment