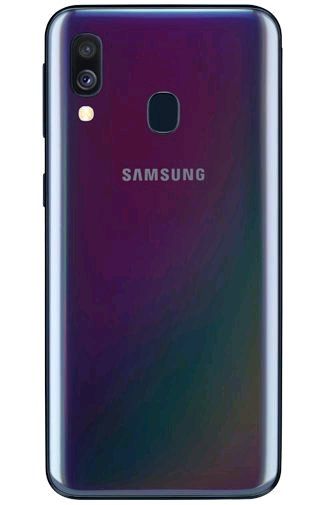 Several renders of the upcoming Galaxy A40 were leaked online yesterday. It’s yet another addition to the new Galaxy A series from Samsung. There’s no need to wait for an official announcement from Samsung because a Dutch online retailer has revealed everything there is to know about this device. The retailer is even accepting pre-orders for the Galaxy A40. Belsimpel’s listing of the Galaxy A40 ends speculation about the handset’s specs at least. It will feature a 5.9-inch FHD+ 2280×1080 pixel resolution AMOLED display and an Exynos 7885 processor with ARM Mali G71 GPU. The device also comes with 4GB RAM and 64GB of storage as standard. There is a microSD card slot for external expansion. ADVERTISING Retailer reveals everything about the Galaxy A40 Details about the cameras are included in the listing as well. There’s a 25-megapixel front camera in addition to a 16-megapixel + 5-megapixel dual camera system at the back with a wide angle lens. It also has a fingerprint sensor at the back. All of this is packed inside a body which measures 144.3 x 69.1 x 7.9mm thin and weighs. It will be made from the same 3D Glasstic material that we have seen on other handsets like the Galaxy A50 and Galaxy A30. Samsung will be selling this device in Black, Blue, Coral and White colors. The suggested retail price for the Galaxy A40 is 249 euro. Samsung hasn’t said when the device will be released and neither has the retailer. It’s taking pre-orders now, though, and it may take until early April for deliveries to begin. April will bring some other new Galaxy A devices as well. Samsung is conducting an event on April 10 to unveil new devices, most likely the Galaxy A90.